By stella on September 4, 2012 in Celebrity Weddings, NEWS 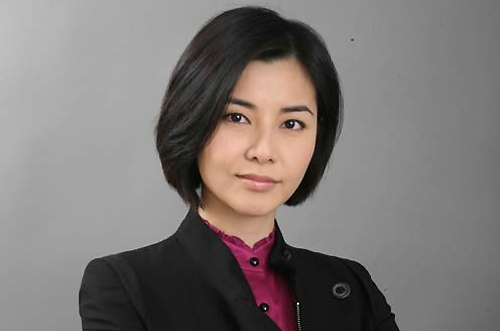 Yoyo Mung (蒙嘉慧) was filming in a church for TVB new drama, A Great Way to Care 2 <仁心解碼II>, two days ago. The reporter teased the soon-to-be bride if she will be nervous about stepping into a church. Yoyo avoided the question carefully and replied that this was not the first time she was filming in a church. However, Yoyo disclosed delightedly that Ekin Cheng (郑伊健) had proposed to her before her birthday which fell on August 3.

Discussing her reaction to Ekin’s marriage proposal, Yoyo said, “I was more shocked than happy! As long as we remember the proposal process, it’s enough. I will inform everyone more details after I get married.”

Yoyo’s Father Has No Response Towards Wedding Plans

Confessing that their marriage was to fulfill their parents’ wishes, Yoyo said, “My grandmother and mother have already passed away. I originally wanted my father to witness my wedding. I did not expect him to have no response to the news after I made the wedding announcement. He only asked me if I wanted to drink soup. Maybe it’s only our wishful thinking. Currently, our families feel that it’s sufficient as long as we are happy together.”

Yoyo and Ekin have not planned their wedding due to their busy schedules. Yoyo revealed that they wished to have a simple and low-key wedding. They may even hold the wedding celebration at their house. When asked if they would be holding a wedding banquet, Yoyo replied, “It’s best not to be too complicated. Wherever there is space, we will hold it there. How difficult it is to have several tables? It is only a wedding.”

Not planning to have any pre-wedding photo shoots, Yoyo said, “We are likely to have our wedding pictures taken on our actual day. If there are any pre-wedding shoots, we might as well use our photos on normal days. Anyway, I will inform everyone after I am married.”

Earlier, tabloids reported that Yoyo currently owned 49 percent of Ekin’s company. Dismissing the rumors, Yoyo responded, “Before the report was out, Ekin already clarified that there was no such thing. The magazine could not find any evidence, thus they fabricated the story. It has been written for so many years. I only share his cat litter and cat urine. Since our three cats are so important, I need to clear away their wastes too.”

Alex Fong (方中信) congratulated Yoyo and even addressed her as Mrs. Cheng. Alex then asked Yoyo to send an early invitation to their wedding banquet. Yoyo asked Alex how many tables he would sponsor the couple. Alex jokingly replied, “It has to be a big event. I am happy for you that at your age, you are finally getting married!”