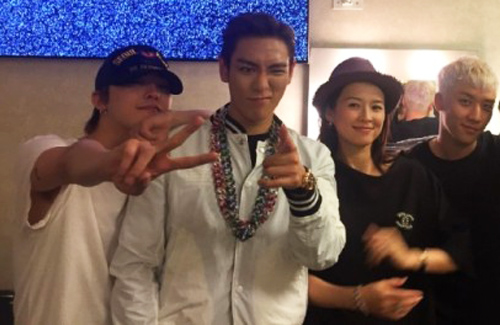 Popular Korean band, Big Bang has been touring major cities in the United States and made its latest stop in Los Angeles. To everyone’s surprise, Zhang Ziyi (章子怡) was also at Big Bang’s concert in Los Angeles, and even met with the band members backstage.

In a photograph uploaded onto her Weibo, Ziyi stood in the middle with a happy grin, flanked by Big Bang members on each side. She captioned the photograph humorously, “Whoever marries one of them will get to bring him home, bang bang bang!”

Ziyi also uploaded another photograph onto her Weibo, in which she poses with T.O.P, a member of Big Bang, with their hands respectively forming the shape of a heart. Many netizens left comments praising Ziyi for her beauty, and also joked that they remained fans of Ziyi’s fiance, Wang Feng (汪峰).

In both photographs, Ziyi was wearing a loose black dress but it did not hide her slightly protruding belly. This re-ignited rumors that Ziyi is currently about seven months pregnant with Wang Feng’s baby.