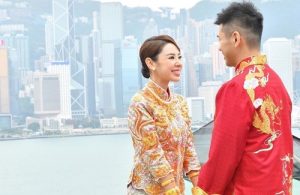 Last month, 38-year-old Zoie Tam (譚凱琪) announced she registered for marriage with her wealthy boyfriend of eight years, Enrico Chong (莊日宇). Although she is marrying into an affluent family, she previously said she hopes to continue working in the entertainment industry after marriage, as she is still young. TVB also dotes on her since she has a sweet appearance and good acting skills. However, pregnancy speculations arose after she recently dropped out of two dramas last minute. 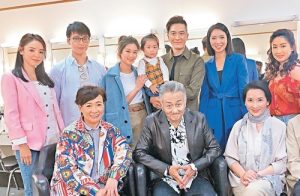 Although Zoie was originally set to play a married couple with Jonathan Cheung (張頴康) in Who Wants A Baby 2 <BB大晒> and even completed a costume fitting for the series, she will no longer be participating in the drama. As a crewmember attributed the sudden changes due to Zoie’s health, the whole world believes she is pregnant, but everyone is afraid to directly congratulate her, as she might be less than three months pregnant.

When a reporter congratulated the actress, Zoie said, “Wow! Why are you saying that? How come I don’t even know about it? I have to deal with some sudden family matters, so I requested a few months off from work. The company is really nice, and the cast and crew are very understanding.”

The reporter also asked her if she‘s waiting to reveal the pregnancy, and she said, “It’s a family matter. I don’t want to reveal too much! I hope you understand.”

However, she admitted that pregnancy is in the plans. “It suddenly feels like we’re rushing to complete our homework. I will tell him that everyone is urging us to complete the homework.”

Yoyo Chen (陳自瑤) Replaces Zoie in Who Wants a Baby 2 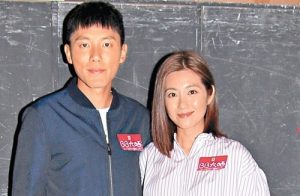 Yoyo, who is taking over Zoie’s role in Who Wants a Baby 2, said she doesn’t know why Zoie dropped out of the drama. “I didn’t ask too much, the company arranged it, but I will do my best. I am happy to participate in the drama.”

She revealed she has known Jonathan for many years, but it’s their first time working together like this. Yoyo said she is very familiar with his personality, and it’s very different from his character’s. “He’s usually very funny, but in the drama, he’s a very good husband who listens to me. I’m not sure if I can immerse in my role; I’m afraid he’ll make me laugh,” she said with a smile.

The mother of one also shared that they will have two active boys in the series, and it is her first time playing a mom in a contemporary drama. “It’s going to be challenging because everyone knows there are a lot of things to consider when working with children,” Yoyo expressed.