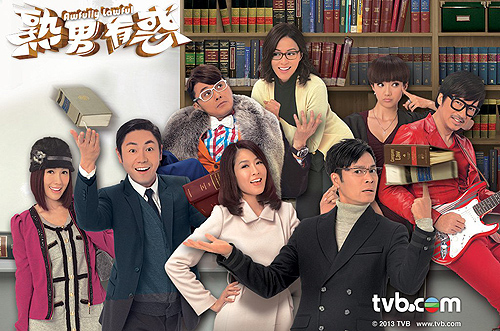 TVB’s summer television season is off to a rocky start. Viewers were not very impressed by the first episode of the summer kick-starter Awfully Lawful <熟男有惑>, a legal comedy drama that premiered on Monday, June 17. However, the series averaged 29 ratings points, and peaked at 30 points.

With a similar support cast and law firm setting, many casual TVB audiences almost mistook Awfully Lawful as a continuation of TVB’s sitcom, Come Home Love <愛‧回家>, which airs in an earlier time slot. As an episode used for establishing characters and their story line, many viewers found the premiere of Awfully Lawful slow-moving and boring as well. However, out of the hoard of redundant characters, there is one lady who caught the attention of netizens – Luk Yip Hing, the busty secretary of Solo, portrayed by Roger Kwok. Luk Yip Hing is portrayed by Ceci So (蘇恩磁), a veteran “Greenleaf” actress who has been in the television business since the 1970s.

Ceci is a graduate of TVB’s second artist training class in 1973. She is best known for her small supporting roles in TVB dramas as a rich housewife or a nosy neighbor. Among her best-known roles are major supporting characters like “Lee Chau Shui” in 1997’s Demi-Gods and Semi-Devils <天龍八部>, “Auntie Sze” in the 2010 sitcom Show Me the Happy <依家有喜>, and “Deneuve” in 2012’s Divas in Distress <巴不得媽媽…>.

The 60-year-old actress posted a photo of herself as the full-bosomed Miss Luk on her Weibo, writing, “My most sexy [appearance] since joining the industry…Awfully Lawful!” In the photo, Ceci wore a tight black blouse that showed cleavage.

Liza Wang (汪明荃) replied to Ceci’s post, writing, “Auntie So, [you] have the ingredients!” Ceci replied, “All thanks to the help of our wardrobe department!”

Produced at 20 episodes, Awfully Lawful will end its run on July 12, 2013, in which it will be replaced by wuxia drama Karma Rider <師父·明白了>.