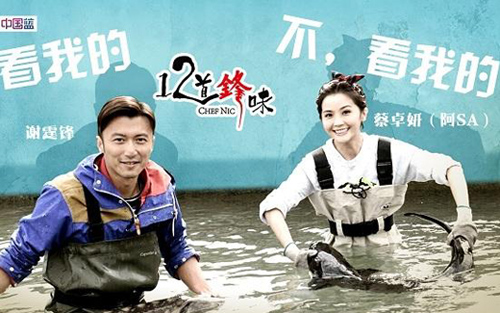 Nicholas Tse’s (謝霆鋒) upcoming travelogue cooking show, Chef Nic <十二道鋒味>, invites his celebrity friends to join him on food adventures around the world. The show premieres on July 12, and will be broadcast every Saturday. Fellow EEG artiste, Charlene Choi (蔡卓妍), is featured in one episode that takes place in Spain.

Nicholas and Charlene share a great friendship and behave like siblings. They have also collaborated in past films such as A Chinese Tall Story <情癫大圣> and New Police Story <新警察故事>. Nicholas has always been very attentive towards Charlene. When he learned that Charlene was upset due to her pet dog’s death, he recommended filming the parts in Spain earlier so he could reassure her. Besides filming for the travelogue, they also visited tourist sites to lighten Charlene’s mood.

Charlene often finds humor in everyday situations and is known to laugh extremely easily, making the filming atmosphere more enjoyable. One crewmember revealed that Charlene was also easily scared. “While we were filming, she had to handle a large fish. It took a long time until she was even brave enough to touch the fish. Another time, a toad suddenly jumped out in front of her on the road, and she was so scared that she almost cried.”