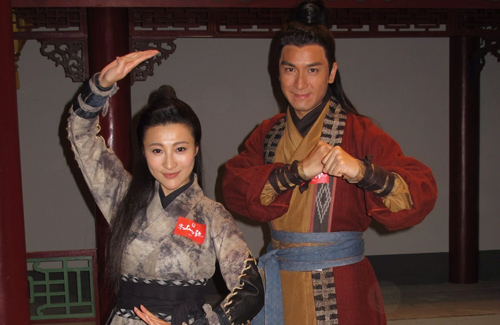 Reporters joked with Kenneth, saying he is preparing himself with this trip to film in mainland China in the future. Kenneth laughed and said, “I’ll be meeting more people, and the best would be to meet beautiful girls! I’m not afraid of rumors, because sometimes they bring me work opportunities!”

Rumors had it that in mainland China, many girls took initiative to get close to Kenneth in the past. He revealed, “When I went earlier, there were people who stuck cards through my hotel door. The photos of the girls were all very sexy, but I was too afraid to phone them. I didn’t want to blow my cover, because I’m probably not who they want. I’d rather be bored.”

Furthermore, Kenneth revealed he seldom visits massage parlors. “I am very afraid of people touching my hips. Once, I went together with Roger Kwok (郭晉安), and I was like ‘kit kit kit’, laughing the entire time. He had to ask me what was going on!”

Raymond Cho (曹永廉) and Power Chan (陳國邦) both brought their little daughters along. Raymond’s daughter was adorable with her cheerful laughter. She gave her father a large sweet kiss on the cheeks. On the other hand, Power’s daughter did not seem as happy, probably due to the hot weather. She did not smile at the camera and instead appeared cool in her mini orange-framed sunglasses.