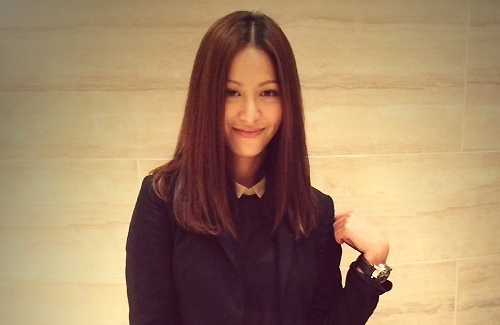 Acclaimed for its relevant storytelling and witty narration, Come Home Love has been one of TVB’s most well-received sitcom in recent years, consistently drawing an average of 24 ratings points per week. To congratulate the cast and crew for their hard work, Mr. Au promised that he would treat the team to big dinners on special holidays.

Joyce Tang (滕麗名), who joined the drama a few months ago, is thankful to have been cast in Come Home Love, expressing that it feels great to be involved in a “stable” series. However, Joyce revealed that she has to request for a temporary break in the series due to the filming of another drama. She said, “The producer and I had a great discussion [about my character] and I will return to the cast once I complete my other drama. I really want my character to have a relationship line, so I’ll have more screen time. Some netizens mentioned that I should be paired up with Joey Law.”

Asked if Joyce finds filming a sitcom to be more comfortable than filming regular dramas, Joyce said, “I’m actually not very used to such a normal lifestyle, because there will always be a lot of traffic in the morning when I go to work. But the cast is very close. We are all like family.”

Recurring cast member Oceane Zhu (朱璇) is happy to hear about the popularity of Come Home Love and is excited about the renewed episodes. As her storyline in the sitcom is finished, Oceane is unsure if she will have the opportunity to appear in future episodes.

“My relationship with [Lai Lok Yi’s character] is over. I really don’t know if I’ll still be in [the future episodes]. Maybe I’ll show up here and there to stir him up, so he will feel bad about the breakup,” Oceane joked.

Oceane likes the steady work style of filming a sitcom, adding that because of her regular work hours, she managed to gain a few pounds. “I almost can’t wear the jeans I used to wear a long time ago. I will work on exercising more. Hopefully I’ll lose another five pounds.”

She also added, “But filming dramas improve my Cantonese. I can hold up more conversations. When I stop work, [my Cantonese] gets worse.”