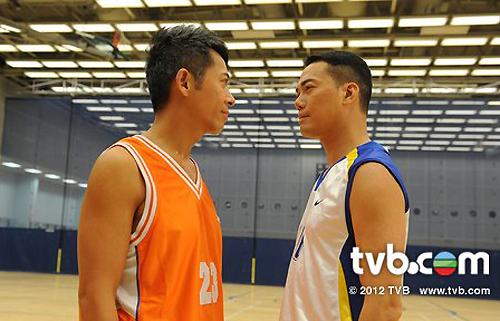 Just when it was speculated that viewership for TVB’s latest legal drama, Friendly Fire <法網狙擊> would be less-than-dismal due to its graveyard slots during the holiday season, it turns out that the series ratings reached 32 points, comparable to TVB’s Anniversary series Silver Spoon, Sterling Shackles <名媛望族> and The Confidant <大太監>! Below are some spoilers for episodes that will be airing next week.

Although JJ Kam (Michael) and Fong Tin Lam (Tavia) are giving each other the cold shoulder during this silent period, viewers will be able to treated to some bedroom scenes between the couple. One particular scene shows JJ driving Tin Lan back to the hotel after a night of drinking and engaged in some heated intimate moments.

JJ and Derek Kok (郭政鴻) will battle it out during a competitive basketball championship, which ends up in a fight ultimately leaving JJ with a bloody nose. The hatred for the enemies deepens after this incident.

Ngai Mei San’s (Sharon Chan 陳敏之) dad will accuse his wife of having an affair with JJ’s dad, played by Benz Hui (許紹雄) . The men also engage in a fight which results in a shocking “breast-grabbing” scene.

JJ’s persistence in reinstating Jonathan Cheung’s (張穎康) case will lead to further conflict with Tin Lam as she disapproves of his actions. During a heated argument, JJ forces a kiss on Tin Lam.

A new character will be introduced – Leung Kin Pak (Patrick Tang 鄧健泓). He will transfer to the police department from the Narcotics Bureau. During a chase sequence with drug criminal Sammy Shum, Kin Pak witnesses the murder of fellow partner Mo Hok Lek (Hoffman Cheng 鄭世豪). Because he was unable to save his partner, Kin Pak vows to seek justice by using various methods to prosecute Sammy.

28 comments to “Friendly Fire” Spoilers for Next Week Revealed!