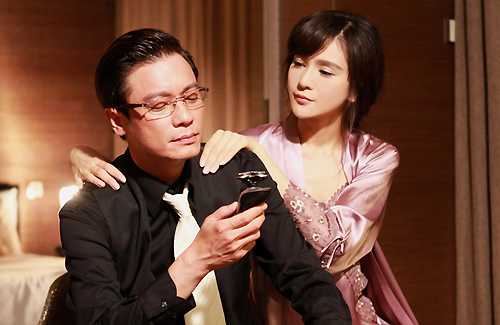 Acting for 30 years, there are few roles that Gallen Lo (罗嘉良) has not played. In mainland Chinese television serial, Woman’s Weapon <女人的武器>, Gallen portrays an employer who sexually harasses his female employees. He uses his powers to make his subordinates yield to him and even ruthlessly frames them for wrongdoings.

Currently airing to positive reviews on the Hubei Art Channel, Woman’s Weapon, which also stars China actors Hu Bin (胡兵) and Cecilia Han (韩雪), centers on the subject of sexual harassment at the work place. The drama revolves around young women who have just entered the workplace. In the midst of enticements and unspoken rules at the office, they eventually learn to stand up for themselves and safeguard their own interests.

With his mature looks, Gallen looked the part of the hypocritical business tycoon, Yang Xin Jun. At home, Yang Xin Jun is a loving and doting husband to his wife. At the work place, his delusions take over and Yang sexually harasses his female workers. If they do not submit, Yang ensures that life would be difficult for them.

Although Yang continues to bend the rules, he eventually overstepped the bottom line, causing his own downfall.

Playing a complicated character such as Yang Xin Jun proved to be an easy task for Gallen who executed the role superbly, balancing the good and bad sides of his character, leaving the viewers confused about their own feelings for this controversial villain. Gallen said of his role, “I have always loved playing semi good and evil roles such as this. It is a challenge to understand them, and that is a thrill on its own.”

Through the drama, Gallen hopes that female workers will learn to be steadfast in their own values and not compromise them despite work pressures or interests in financial gain.