Grace Chan Not Embarrassed to Bare Her Back 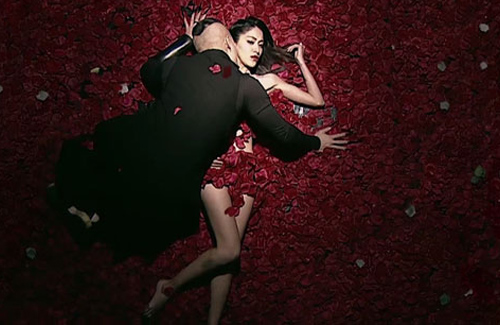 Heavily promoted by TVB, Grace Chan (陳凱琳) has been filming for new drama Blue Veins <殭>. The hardworking actress also does not mind showcasing her sexy side. In a recent photo shoot for the drama, Grace bared her back. In another still, she was surrounded red rose petals while Joel Chan (陳山聰) leaned over her.

At an Easter function with Moon Lau (劉佩玥) yesterday, Grace revealed that she did not suffer any embarrassment despite the amount of skin exposure before the camera. “A very beautiful and artistic method was used to film the scene. I used a lot of strong tape for the front [of my chest]. The most exhausting thing was having to slowly peel off the adhesive tape. Because I didn’t want my skin to turn red, I had to take a lot of time to slowly peel it off.”

Grace revealed that she had consulted with her parents beforehand. She shared, “They were worried at first, so I asked if they wanted to come take a look at TVB. But they trust me and trust TVB. I think when I watch this 20 years from now, I will be very happy.”

Grace Denies Being Cast in “Legend of Empress Lu”

Although TVB has plans to film a large-scale production of Legend of Empress Wu (呂后傳), producer Lee Tim Sing (李添勝) is still looking to cast the female lead after Charmaine Sheh (佘詩曼), Myolie Wu (胡杏兒), and Tavia Yeung (楊怡) turned down the role. Recent reports claimed that Grace will instead be cast in the role.

In response to the news, Grace said, “I’ve never heard of this. Don’t report things that aren’t true. No one has approached me. From what I know, filming will not start anytime soon. I think they will find a suitable person and won’t cast someone to rush filming.”

After completing filming Blue Veins in May, Grace intends to visit her brother in Canada and take a short break.

16 comments to Grace Chan Not Embarrassed to Bare Her Back