Jason Chan Turns into a Drug Addict for “Trade Wars” 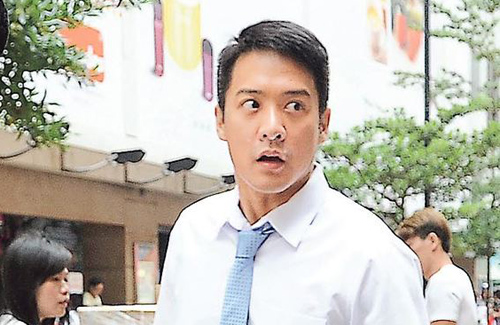 Jason Chan (陳智燊) is shedding his usual healthy image to challenge a serious and gritty role in Trade Wars <商戰>. Playing the son of a wealthy man, Jason will become involved in an indecent relationship with his sister-in-law and will also battle a debilitating drug habit.

A graduate of TVB’s artiste training class, Jason has been active mainly as a variety host and a minor supporting actor until his breakthrough role in 2011’s sitcom Be Home For Dinner <誰家灶頭無煙火>. His good-boy image left a positive impression on viewers’ minds, and as a result, he has since been cast as similarly righteous characters. Often described as one of TVB’s most heavily promoted artistes, Jason was quickly given heavier supporting roles, and in 2012 he became male lead for the very first time in Missing You <幸福摩天輪>.

Although he does not mind being typecast, TVB seems intent on shaking up his well-established image. Filming Trade Wars in Causeway Bay on April 29, Jason was seen wandering the streets looking disheveled and sluggish. With white powder covering his nose and mouth, he looked very much like a confused drug user living in fear of his delusions. Appeared embarrassed by the attention from nearby onlookers, Jason quickly completed the scene and hurried off the set.

Seeing his role as a welcomed challenge, Jason explained that the scene gives viewers a peek at the internal demons his character struggles with, which partially contributes to his rift with his family. Happy with his current assignment, he praised the drama’s script and is thankful for the opportunity to film once again with veterans Elliot Ngok (岳華) and Wayne Lai (黎耀祥).