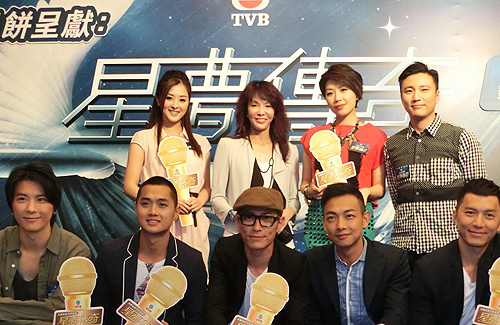 Due to the popularity of talent show, The Voice <超級巨聲>, TVB announced that there would be a fourth season with a total of ten episodes premiering in July. The fourth season, however, will feature artists and is called Star’s Legend <星夢傳奇>. So far, the first episode will feature Mandy Wong (黃智雯), Oscar Leung (梁烈唯), Carat Cheung (張名雅), and Benjamin Yuen (袁偉豪).

The hosts of the fourth season, Carol Cheung (鄭裕玲) and Amigo Chui (崔建邦), along with the contestants appeared at the promotional event today in high spirits. The judges were also present, which include Alan Tam (譚詠麟), Sally Yeh (葉蒨文), Jenny Tseng (甄妮), Elisa Chan (陳潔靈), Hacken Lee (李克勤), Eric Woo (巫啟賢), and Anthony Lun (倫永亮). It was also announced that the grand prize for the champion this time would be approximately worth $338,000 HKD.

In order to appear on the show, TVB ran a voice audition and luckily, Oscar’s performance enabled him to become a contestant on the show. It was rumored that Oscar is the pre-fixed winner of Star’s Legend, in which he denied the rumors. Oscar admitted that he is not highly confident compared to colleagues who sing very well; he believes that Fred Cheng (鄭俊弘), who was placed third in a singing contest in the past, has a good chance.

It is also reported that Oscar is planning to settle down with his long-time girlfriend and they are in the midst of their wedding plans. But Oscar did not wish the wedding to be aired live by TVB because he is afraid it would be inauspicious.