Sneak Peak of TVB’s Prison Drama “The Battle of Tomorrow” 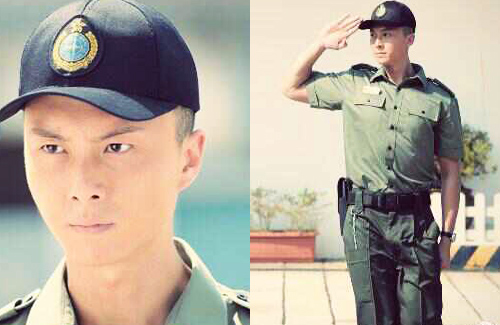 Above: Vincent Wong stars in “The Battle of Tomorrow”.

The Battle of Tomorrow will star Lawrence Ng (吳啟華), Kate Tsui (徐子珊), and Vincent Wong (王浩信) as officers for the Hong Kong Correctional Services, a disciplined department responsible for the handling of inmates and prison facilities. The drama, which will officially begin principal photography in January 2014, will be filmed at real prison locations in Hong Kong.

Producer Lam Chi Wah (林志華) said, “We actually went to real restricted areas in prison to film [the sales presentation trailer]. The Correctional Services arranged the inmates to stay elsewhere so our crew could use the facility. It’s a rare opportunity to be able to shoot action scenes in a real prison, but we were able to do that!”

The sales presentation trailer features a love story about Kate, a young assistant officer who falls in love with a high-ranking officer, Lawrence, someone nearly twenty years her senior. Lawrence even held Kate in his arms when she was born. Though she initially sees Lawrence as an uncle, their mentor-student relationship slowly progresses to a romantic one. Producer Lam also spilled, “Kate even takes a knife for him.”

In a separate story arc, Vincent portrays a troubled officer who ultimately gets incarcerated. Vincent admitted that he could not stop crying when he was shooting his prison scene, saying, “Because we filmed it in a real prison, there were a lot of things left behind by the inmates. I went in and thought about what would happen if I couldn’t come out. I thought about how I wouldn’t be able to see my family, and I cried. The prison atmosphere is so real!”

Joyce Tang (滕麗名) also filmed the sales presentation trailer, starring as a female inmate who bursts into tears upon holding her toddler son.