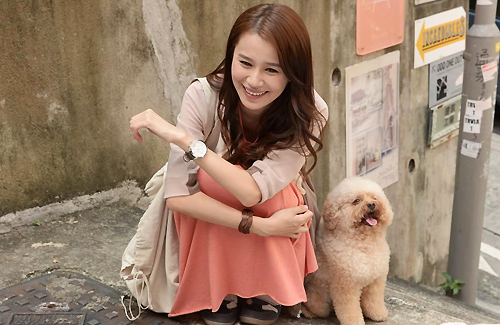 Modern TVB series Swipe Tap Love <愛我請留言> aired on March 31, starring Raymond Wong (黃浩然), Priscilla Wong (黃翠如), Elaine Yiu (姚子羚), and Tony Hung (洪永城). The romantic series brings the audience back to 2009, a year when smart-phones were not as popular. It was a time when sending text messages did not replace phone calls or physically meeting up with the person you love. The series spans over a few years to inform the audience how technology has changed lives. Yu Chor Kin’s (Priscilla Wong) loving family was hit with grief after her father’s sudden death in 2009. To help ease her sadness, she decides to invest in a large chocolate company as a marketing manager. There, she meets the outgoing Cheung Yat Hei (Tony Hung), who intends to pursue her. After dating for four years, Chor Kin realizes Yat Hei has developed an ambiguous relationship with one of his coworkers. Issuing a breakup, she moves back to live with her mother. Since the Yu family constantly babysat Lok Tin Sung’s (Raymond Wong) daughter, Chor Kin eventually becomes close with the little girl.

Meanwhile, Tin Sung is a glass artist who had a flash marriage with doctor Choi Yin (Elaine Yiu) in 2009. After their marriage, he went to work for a furniture company as a purchasing manager. Besides being responsible towards his career, he also devotes his remaining time to his family. He provides care for his daughter, as well as his wife who faces intense pressure from her profession. The couple believes that as long as they work hard, they are able to achieve a perfect balance between work and family. However, they underestimate the mounted pressure and eventually find themselves struggling to maintain their rocky relationship.

Wong Kam Gwai (Eddie Kwan 關禮傑) is on poor terms with his neighbor, Gau Fei (Kelly Fu 傅嘉莉), who is a materialistic woman willing to spend all her income on brand name purses and high heels. However, a change in their relationship occurs as Kam Gwai finds out Gau Fei’s tragic past of being left behind by her father. He suddenly develops a caring attitude, and Gau Fei is touched by his behaviour. Just when she is thinking of marriage, a handsome marketing manager, Wong Chi Cheung (Vincent Wong 王浩信) joins the chocolate company. His “Prince Edward” looks attract all the single ladies.

Store manager, Sung Lau Kuen (Kaki Leung 梁嘉琪), suspects her boyfriend is cheating on her. She secretly digs through his cell phone and also asks her friends to help check on the Internet whether he is online. After Gau Fei starts work at the chocolate store as a trainee, everyone believes Lau Kuen is making life hard for her on purpose. Furthermore, Lau Kuen’s relationship with Ho Chi On (Jonathan Cheung 張頴康), who she has had a crush on for years, experienced no development because of her seemingly strict appearance.

43 comments to “Swipe Tap Love” Brings Romance Back in Time