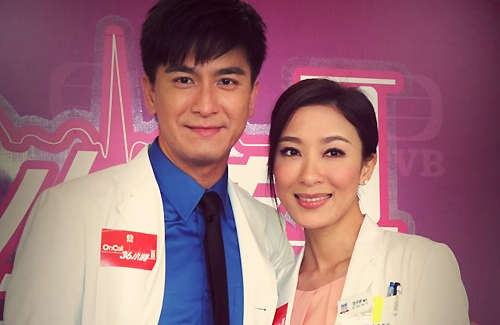 Lawrence’s portrayal as Dr. Paul Ching in Healing Hands <妙手仁心> left a deep impression upon viewers after more than a decade of its broadcast. TVB sought him out eagerly to star in The Hippocratic Crush 2  after a 8-year absence from the station, and Lawrence agreed to the project not for money, but rather due to his roots with the company. Portraying a pathologist in The Hippocratic Crush 2, Lawrence stated that he will be performing a surgery on Kenneth’s character but declined to reveal the details of the type of illness.

Lawrence already noticed Kenneth’s past acting performances when he was only a newcomer and praised his talent. Lawrence also praised that Tavia has grown more stunning over the years, compared to when she had first entered the industry.

Kenneth and Tavia will portray a married couple in The Hippocratic Crush 2. Tavia said, “It’s great that the characters’ love story can be continued in the sequel.” Kenneth also noted that he did not feel any pressure working together with Tavia again after she won TVB Best Actress.

Tavia and Him Teased

Due to Tavia and Him’s real-life romance, the pair was the focus of media attention at the costume fitting. Kenneth joked that he will not be embarrassed portraying Tavia’s husband in the drama and will kiss her as required by the script.

Him revealed that he will be in love triangle with Eliza Sam and Crystal Li in The Hippocratic Crush 2. Asked if he was very excited since the drama featured many beautiful ladies, Him rushed to responded, “No, I really did not feel any special excitement because of this. In the last series, I didn’t end up with anyone, so this time I will be paired with two women. Poon Ka Tak (潘嘉德) told me, ‘You have to be a bit patient. They are both newcomers.'” Eliza quickly interrupted and said, “I have improved compared to last time!”

Will Him require Tavia’s permission when filming the romantic scenes? “I’ll discuss with my management company, Filmko. There are limits to television explicitness.” Tavia also brushed off any potential rumors that may result from Him’s romantic pairing, “We’ll treat it as promotion.”

For the upcoming Lunar New Year holiday, Tavia will be performing in the United States. Tavia does not mind visiting Him and the Law family at their home for the holidays, as she has already met Him’s mother from past visits.

Despite appearing in The Hippocratic Crush, Candy Chang (張慧雯) was not at the costume fitting yesterday.  Asked if she was omitted from the sequel due to Candy’s implication in a marijuana possession case, producer Poon Ka Tak (潘嘉德) explained, “The case has not ended yet, so we do not know how to arrange it. What if she has to go to court during filming? When she’s all done, we will make arrangements for her to come back.”