TVB Uses CGI to Censor Cleavage in “The Empress of China” 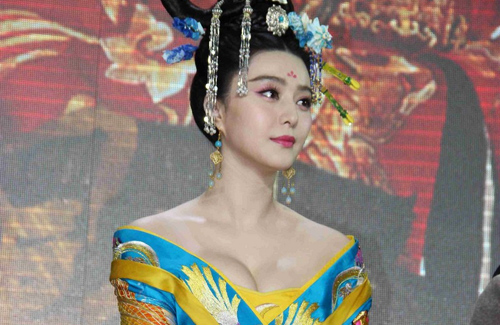 TVB hired an expert CGI team to cover up the cleavage-revealing costumes in Fan Bingbing’s (范冰冰) historical drama The Empress of China <武則天>, which is scheduled to broadcast seven days a week on TVB in April.

The 82-episode epic series, which will be reduced to 70 episodes in the TVB Cantonese-dubbed version, incurred some controversy when it aired on Mainland China’s Hunan TV in January. The actresses’ costumes were deemed too revealing by Chinese censors, and Hunan TV had to temporarily halt broadcast to re-edit the drama. This resulted in the censored scenes to show only the characters’ heads rather than their bodies. Despite complaints on the shoddy editing, The Empress of China managed to pick up in ratings after it was put back on air, eventually becoming one of Hunan TV’s highest-rated programs in recent years.

Though TVB previously announced it would air the uncensored version, the station said recently that it will air a “moderate version” instead, and hired a special CGI team to cover the actresses’ cleavage with a chiffon layer. Despite the moderate censorship, the CGI in TVB’s version was praised for looking realistic and detailed.

Taiwan’s CTi Entertainment, however, will be airing the uncut, uncensored version starting March 30.

Produced at 300 million RMB, one of China’s most expensive dramas in history, The Empress of China is about the life of of Wu Meiniang, Ancient China’s first and only empress sovereign. It also stars Zhang Fengyi (張豐毅), Aarif Lee (李治廷), Janine Chang (張鈞甯), Zhang Ting (張庭), and Kathy Chow (周海媚).