Wallace Huo Becomes Immortal for “The Journey of Flower” 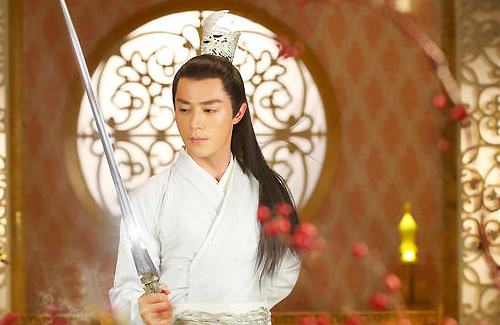 The currently filming fantasy-wuxia drama, The Journey of Flower <花千骨>, which stars Taiwanese actor Wallace Huo (霍建華) as a handsome immortal and mainland Chinese actress Zhao Liying (趙麗穎) as his pupil, recently unveiled its first teaser. The Journey of Flower is expected to be released in 2015.

Adapted from a well-known online novel of the same name, The Journey of Flower is the story of Hua Qiangu (Zhao Liying), an orphan who is considered unlucky and was given the name “thousand bones.” In order to avoid the pursuit of ghosts after her father’s death, she decides to take on a deity as her master and soon becomes the sole pupil of Bai Zihua (Wallace Huo). The two travel around to assist the needy, and Qiangu eventually falls for her gentle but heartless mentor, in spite of the many trials standing in their way.

Since its inception, The Journey of Flower has piqued the interest of potential buyers from Hong Kong, Taiwan, Japan, Korea, Thailand, and Singapore. As a result, the production team chose to release a short teaser in order to give audiences a glimpse of the drama. However, producer Tang Lijun (唐麗君) emphasized that the video is not an official preview, since The Journey of Flower is only halfway through the filming process. The drama’s first official preview is scheduled to be released during the TV Festival de Cannes in October.

In a daring move, The Journey of Flower’s production team released two versions of the teaser video: one with the expected Mandarin Chinese dub, and the other with a surprising English voiceover. Although the mix of Chinese names and English dialogue is a little awkward, the translations flow quite well, and the video is sure to be an important step in the future globalization of mainland Chinese dramas.

The teaser also allowed fans to see the elegant and unique style of The Journey of Flower, which brings to life the imaginary and aesthetic concepts of the original novel. Much praise was given to the costumes, designed by Kenneth Yee (奚仲文), who won a Hong Kong Film Award and was nominated for an Academy Award for his costume design work in Curse of the Golden Flower <滿城盡帶黃金甲> in 2007.

“The Journey of Flower” Teaser Trailer in Chinese

“The Journey of Flower” Teaser Trailer in English