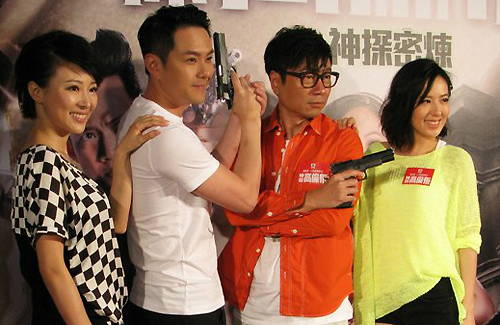 The cast of TVB’s Bullet Brain <神探高倫布> attended a promotional event yesterday to boost up the lackluster ratings that the drama has been suffering since its Hong Kong premiere last week. The quirky 1960s period drama stars Wayne Lai (黎耀祥) as Detective Columbo, a peasant boy who turns into a genius after getting shot in the head.

The drama has since pulled in mediocre average ratings of 26 points per episode, and peaked at only 29 points. The serial also drew in complaints from the audience, which included complaints on its irrational plot, historically-insensitive content, and unoriginal storytelling.

“[The ratings are] so far so good,” said Wayne. “The drama was filmed in a different way, so it may be hard for the audience to understand, but as actors, we should all attempt to try new things. I support this new filming style. If the plot is easy to follow, people will say it is cheesy. If it gets slightly more complicated, people will say they don’t understand it. It’s hard to please everyone.”

In the scene, a smirking Wayne sticks his hand under Sire’s dress in order to pick out a cockroach that crawled up her leg. Viewers expressed that the suggestive scene could have come out of an AV (adult video) movie.

On his thoughts about the AV remarks, Wayne said, “These complaints are getting so overboard now. How does the scene appear like an AV?”

In related news, Natalie Tong (唐詩詠), who will be seducing Wayne in Bullet Brain, revealed that she will have a few bold scenes, including an exotic dancing sequence while wearing a revealing shirt.