Will Fred Cheng Be Able to Win “The Voice: Stars’ Legend”? 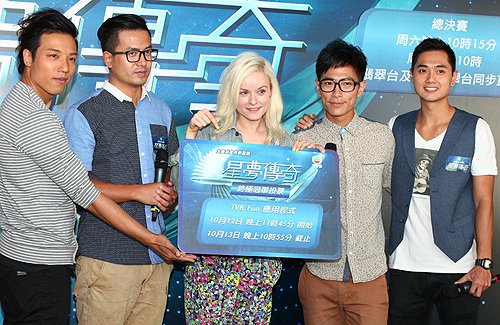 After a wonderful season of The Voice: Stars’ Legend <星夢傳奇>, the top finalists will compete for the championships on October 13. With Fred Cheng (鄭俊弘) having an early breakout performance on the show and impressing judges with consistent singing abilities, will he emerge as the final winner? Or will there be an upset from another dark horse candidate?

Before heading off to the finals however, there will be one final round of eliminations. This season’s final contestants, Fred Cheng, Corrina Chamberlain (陳明恩), Hoffman Cheng (鄭世豪), Ronald Law (羅鈞滿), and Yao Bin (姚兵), will all choose one song to sing for the judges and the singer with the lowest score will be eliminated – leaving only four to enter the final competitions.

Then on October 13, the final four will sing a song of their choice and the winner of this season will be voted by audience members through the TVB Fun system. The prize for the champion this season is approximately $600,000 HKD! As well, the judges, Eric Moo (巫啟賢), Ruth Chen (曾路得), Maria Cordero, Eric Kwok (郭偉亮), Alan Tam (譚詠麟), Hacken Lee (李克勤), and Dominic Chow (周啟生), will choose who they think gave the best overall performance and present them with the Professional Recommended Performance Award.

The judges will also be collaborating with the finalists in singing numerous songs to lighten up the competition atmosphere. Besides Dominic, Eric, Corrina, Fred, and Grace Wong (王君馨) who will be getting together to perform a medley composed of popular English songs, Alan and Hacken will also be giving viewers a taste of their new numbers.

During the three months of intense training and tough competition, some stars have benefited from greater popularity and gradually discovered their passion for music. On Sunday’s competition, the stars will be giving it their best and final shot in the finale of The Voice: Stars’ Legend.

51 comments to Will Fred Cheng Be Able to Win “The Voice: Stars’ Legend”?