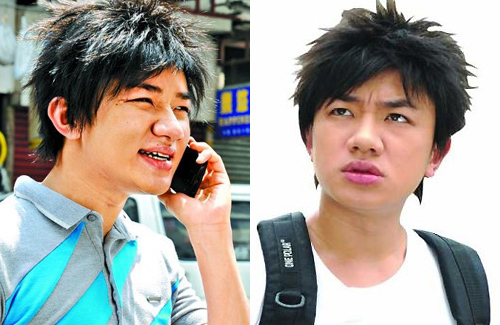 Wong Cho Lam’s (王祖藍) first scriptwriting effort, Inbound Troubles <老表，你好嘢!>, is a big hit. With ratings peaking at 33 points in its first week of broadcast, the drama’s controversial depiction of the tensions between Hong Kong and mainland Chinese people has captured nearly 3 million viewers to tune in. The vivid punch lines and detailed characterizations also left a deep impression among viewers.

When TVB’s scriptwriters were poached by Ricky Wong’s (王維基) City Telecom (CTI) last year, Wong Cho Lam maximized on the opportunity to approach TVB executive, Tommy Leung (梁家樹), with the story of Inbound Troubles. Since part of the story is based on Cho Lam’s real life experiences, he felt it was best to write the script himself.  Cho Lam was reportedly compensated $700,000 HKD for Inbound Troubles.

From February through July 2012, Cho Lam wrote the majority of the script for Inbound Troubles. Due to the time required for writing the script, Cho Lam lost out on other money-making opportunities, which cost him a 7-figure sum.”The main script, story, characters, and comic situations were created by me. The details in the script were completed by TVB scriptwriters. This is a collaborative team project.”

The memorable dialogue, coupled with the distinct characters were due to Cho Lam’s attentive writing. Taking inspiration from classic hit shows that had vivid punch lines, Cho Lam said, “I did not omit any fine details. I carefully designed the dialogue and scenes. It is the result of team work; the time we spent on the project was worth it.”

Cho Lam drew inspiration from Carol Cheng’s (鄭裕玲) classic film, Her Fatal Ways <表姐，你好嘢> and his own family experiences to create the story behind Inbound Troubles. His grandmother had illegally crossed the border from mainland China to Hong Kong decades ago, and sent back her hard-earned money to relatives in China. “Nowadays, society is full of contradictions. We often say that mainlanders are sharp and breaking out, that China is full of power, but Hong Kong attracted a lot of foreign investment in the 1960s and 1970s and people did eat rice with shark fin.”

Since the release of Inbound Troubles, mainland netizens felt that the drama’s content besmirched mainlanders, while Hong Kong locals said that the drama attempted to harmonize tensions. Cho Lam urged audiences not to analyze the content too seriously, but rather relax and enjoy the series.

Cho Lam’s efforts were initially met with adversity from his colleagues, in which an anonymous TVB scriptwriter criticized the qualifications Cho Lam had to become a scriptwriter. Met with immense pressure to succeed, Cho Lam reportedly lost sleep for months while working on Inbound Troubles, writing the script and filming for the drama at the same time.