TVB Releases Synopsis for “Triumph in the Skies 2” 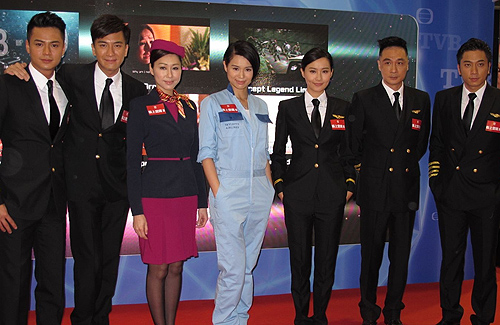 The second installment to Triumph in the Skies <衝上雲宵> is finally airing this summer! TVB’s long overdue follow-up of the pilot drama will premiere on July 15, 2013 on TVB Jade, taking over the time slot that will be vacated by fantasy drama A Change of Heart <好心作怪>.

The story of Triumph in the Skies 2 takes place roughly a few years after airline pilot captain Sam (Francis Ng 吳鎮宇) marries Zoe (Myolie Wu 胡杏兒), a passenger service agent who was born with a severe heart condition. When Zoe dies, the introverted and mournful Sam resigns his position as pilot captain and spends a long vacation in England. There, he meets the heartbroken student pilot Holly (Fala Chen 陳法拉), who convinces him to return to Hong Kong to join Skylette Airlines.

At Skylette, Sam meets Jayden (Chilam Cheung 張智霖), a boastful and womanizing captain-in-training whom Sam is in charge of examining. Their opposite personalities clash and their rivalry become even stronger when both of them develop a fondness for Holly.

Meanwhile, Sam’s younger brother Isaac (Ron Ng 吳卓羲) meets aircraft maintenance technician Summer (Myolie Wu), Jayden’s cold and withdrawn younger sister. Summer bears a strong physical resemblance to Isaac’s deceased sister-in-law Zoe, and Isaac finds it hard to ignore her. An unfortunate experience in her childhood causes Summer to loathe her elder brother Jayden, but Isaac helps the pair patch up their relationship. Summer falls in love with Isaac, but Isaac does not want to remind Sam of his heartbroken past.

Filming for Triumph in the Skies 2 took nearly seven months to complete. Aside from Hong Kong, the drama was also shot at various locations in mainland China, Taiwan, France, and England.