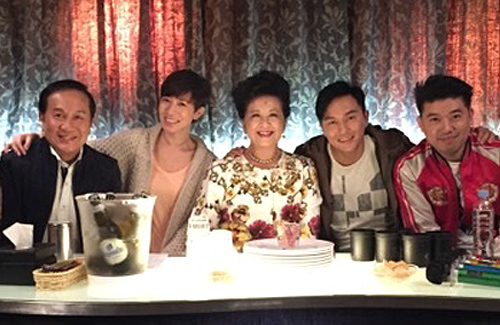 Fourteen years ago, Chilam Cheung (張智霖) and Charmaine Sheh’s (佘詩曼) collaboration in Return of the Cuckoo <十月初五的月光> made television history. The TVB drama averaged 36 points in viewership ratings, and peaked at 46 points. Patrick Kong (葉念琛) announced making a new movie to follow up on the moving love story.

Yesterday, the entire cast including Chilam, Charmaine, Nancy Sit (薛家燕) and Helen Ma (馬海倫) met in karaoke studio in the Kowloon Bay area. The cast members have not gathered together some time and excitedly took group photos.

Generating romantic rumors in their past drama collaborations, Chilam and Charmaine were seen sitting apart from each other although they portray an onscreen couple. When asked on why he did not sit with Charmaine, Chilam quizzically asked, “Why do I have to?”

Since it has been more than a decade since Return of the Cuckoo, Chilam admitted that he had put the character behind him years ago. However, his feelings for the character slowly came back after filming a scene earlier.

On November 26, the cast will head to Macau for on location filming. Chilam laughed, “I heard about it, but I have work that day – I’ll see if it’ll work out with my schedule! If it doesn’t work, tell Owen Cheung (張振朗) to go in place for me first – everyone says he is good at portraying me!”