Eddie Peng Poised to Go International with “Rise of the Legend” 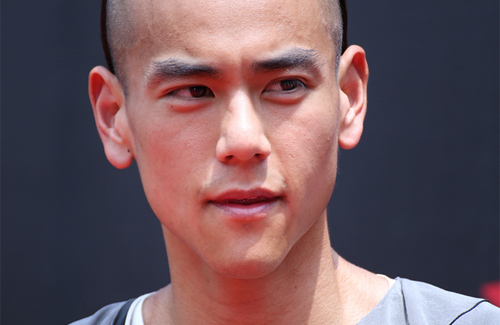 Despite widespread skepticism over Eddie Peng’s (彭於晏) casting as martial arts legend Wong Fei Hung in the upcoming action film Rise of the Legend <黃飛鴻之英雄有夢>, director Chow Hin Yeung (周顯揚) and producer William Kong (江志强) have stuck by the actor’s side through thick and thin. In a recent interview, Chow and Kong shared about how they ended up choosing Eddie for the lead role, as well as their hopes for Rise of the Legend on an international scale.

Because Eddie lacks a foundation in kung fu, many movie fans expressed doubt that he could accurately portray Wong Fei Hung, who has been played by martial arts masters like Kwan Tak Hing (關德興) and Jet Li (李連杰). Eddie shared that when he first saw Rise of the Legend’s screenplay, he did not even register the words “Wong Fei Hung” and instead thought it was merely an ancient wuxia film. But when he realized the truth, the pressure began to build.

The pressure was not unfounded, as the casting decision instantly led to skepticism, with many saying, “No one can surpass Jet Li” or “What right does Eddie have to play a classic character?” It got to a point where Eddie refused media interviews during the preparation and filming of Rise of the Legend, explaining he wanted to wait until after everyone had seen the movie before saying anything.

In the end, Eddie performed almost all of his action scenes by himself, opting for a stunt double only when the moves were too dangerous for a non-professional to attempt. “He’s a very hard-working actor,” praised Kong, who later revealed that Eddie had rejected all other filming offers in 2013 so he could focus solely on training for Rise of the Legend. He ended up spending half a year preparing for the role – all without pay.

Eddie’s dedication to his acting highly raised his esteem in the director’s eyes as well. “Eddie left a deep impression on me when I watched Jump! Ashin <翻滚吧！阿信>,” shared Chow. “He isn’t a gymnast, but he went through training and made his character seem very realistic.”

Focused on Affinity with the Audience

Even though finding a skilled martial artist would have been easier, Chow insisted on using a bona fide actor who could resonate with the audience, rather than settling for a kung fu practitioner who could not act. In his point of view, this is where Tai Chi Zero <太極之零開始>, another big-name martial arts film, fell short, since its lead actor, wushu champion Jayden Yuan (袁曉超), lacked the acting chops to sustain the movie.

“We didn’t want a martial arts star, because the story is the most important,” Chow explained. “We felt that Wong Fei Hung’s fighting scenes could be practiced and remedied in other ways, but that it would be impossible to change the [actor’s] affinity with the audience.

“Many people think that if you haven’t been practicing [kung fu] for ten-plus years, you won’t be able to do it,” Chow went on. “But for me, as long as you’re willing, you’ll be able to do it.”

In contrast with previous Wong Fei Hung films, Rise of the Legend aims to present a more humanized version of the martial arts master. The movie shows him gambling, killing, weeping, and even visiting a brothel. At one point, Wong Fei Hung joins a gang – though his ultimate reason is to infiltrate the gang and disintegrate its labor recruiting business.

“Every person has a time when he was young and just started,” said Chow. “If you look at the history of Wong Fei Hung, when he was young, he was a gangster and he liked to fight. After that, he grew up and became a master. He wasn’t one immediately.”

By providing the humanistic side in Rise of the Legend, Chow hopes to shine the international spotlight on Wong Fei Hung, whom he sees as the “equivalent of a Chinese superhero.”

“I feel he is qualified to stand on the same international stage as Batman and James Bond,” he said.

Kong too hopes that Rise of the Legend will achieve international appeal, since it has been “too long since a Chinese movie has done well on a global scale.” Known for his financial backing of Crouching Tiger, Hidden Dragon <臥虎藏龍>, even when everyone warned him not to, Kong is confident that Rise of the Legend will change the popular opinion that interest in kung fu movies is waning.

“There must be a market for kung fu films,” said Kong. “The problem is that we lack the ability. If you can’t film something good, that’s your own problem. Don’t say that the market isn’t good.”