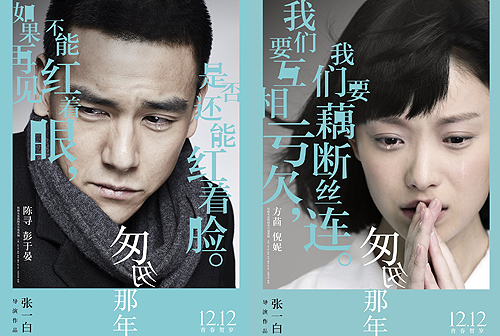 Six new character posters have been released for Zhang Yibai’s (张一白) latest romantic film, Back in Time <匆匆那年>. Starring Eddie Peng (彭于晏), Ni Ni (倪妮), Zheng Kai (郑恺), Wei Chen (魏晨), Zhang Zixuan (张子萱) and Chen He (陈赫), Back in Time is an adaptation of Jiu Ye Hui’s (九夜茴) novel of the same name, which follows the journey of six best friends from their youth to their adulthood. The film will be released on December 12 in Mainland China.

The character posters for the film feature the six main characters having reached adulthood and looking in despair.

Great effort was put into perfecting the film’s theme song, which is performed by Faye Wong (王菲). Director Zhang Yibai revealed that the fates of the characters in the film are subtly revealed in the song’s lyrics. Faye Wong’s performance of the song will also be an important part of the film’s story, in which Eddie writes the song for Ni Ni. Unfortunate, Ni Ni never has the opportunity to hear the finished work in the end.

The lyrics of the song is written by prominent lyricist Albert Leung (林夕), who quickly wrote the song after only reading a 1,000-word synopsis of the film. During the production of the film, Albert Leung consistently met up with the film’s writers to grasp a better idea of the story’s concept to perfect the song’s lyrics. Director Zhang Yibai praised that the song is not only a work of art, but also a vital part of the film.

“Back in Time” Theme Song by Faye Wong