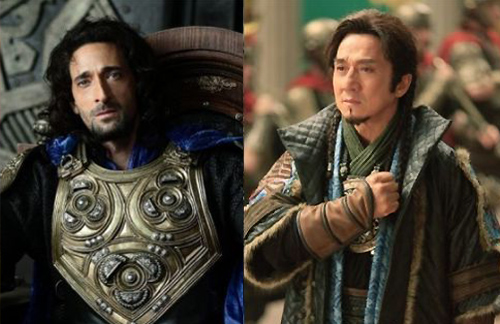 Dragon Blade is not Adrien’s first Chinese film. The Oscar-winning actor has previously starred in Feng Xiaogang’s (馮小剛) Back to 1942 <一九四二>, released in 2012. According to reports, Adrien was hired for $8 million USD to star in Dragon Blade. He was absolutely thrilled to be able to work with Jackie. When Adrien first heard that he was cast in the film, he called Jackie up personally and told Jackie that was very happy to work with him.

This month, production was moved to a desert location in the Aksai County of the Gansu Province. The weather was unpredictable and the cast often encountered strong winds. Adrien, who portrays a Roman prince in the film, had to wear thick robes and heavy armor in the scorching heat. Despite these hardships, he had no complaints. He also added that filming has been very enjoyable and he is having a lot of fun.

As the film’s action choreographer, Jackie was full of praises when he was asked to comment on Adrien’s action scenes. “John Cusack and Adrien Brody are not action stars, but they’re very fast learners. Also, my fighting style is very rigid and tough. It’s not the type where you fly around.”

Jackie revealed that he spent seven long years to prepare for Dragon Blade, which costs $65 million USD to produce. He is confident in the film’s box office results and called the film the “turning point” of his life.

Siwon said he finally understands why people like to call Jackie “Big Brother.” He said, “Jackie protects everyone very well. He prepares food for the cast and crew. He would even offer us small things like citron tea. I really hope to have another opportunity to work with Big Brother again.”