“Triumph in the Skies” Movie Premieres in Hong Kong 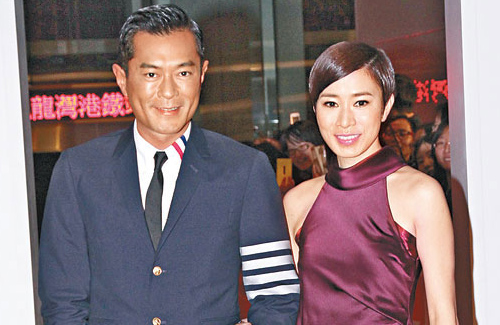 The long-awaited film version of Triumph in the Skies <衝上雲霄> held its Hong Kong premiere yesterday. The main cast, including Louis Koo (古天樂), Chilam Cheung (張智霖), Charmaine Sheh (佘詩曼), Francis Ng (吳鎮宇), and Amber Kuo (郭采潔) were present. Fans flooded three stories of the plaza to get a glimpse of the stars.

Since Amber had especially flown to Hong Kong for the film’s premiere, Chilam said he will be sure to treat her out for a meal. Every time he wanted to treat her out for dinner, she always had an excuse of being sick or tired. Amber clarified that Chilam has not had a chance to pay because every time the group went out to eat, Louis would fight for the bill.

Francis had joked that if box office sales are ideal, the three male leads would direct a sequel and film each other’s scenes. Chilam pointed out that he has had experience directing a music video beforehand. He suggested, “I can film certain ‘parts’ of Louis Koo. The higher the box office sales, the better!”

Francis further expressed that if reception for the film is positive, he believes the company would invest in a sequel. Asked whether they would consider switching the romantic pairings, Francis smiled and said, “I hope the audience isn’t tired of it yet. The two men definitely want to film it. Perhaps [they] feel the romance is not passionate enough and want to take it into their own hands. With so many steamy bath scenes, they can continue to make it more fiery.”

Louis added that if the film gains a net profit of $40 million HKD, he would personally pilot an airplane to treat the reporters on vacation. Standing beside him, Charmaine played along and said, “Then I’ll be the stewardess!”