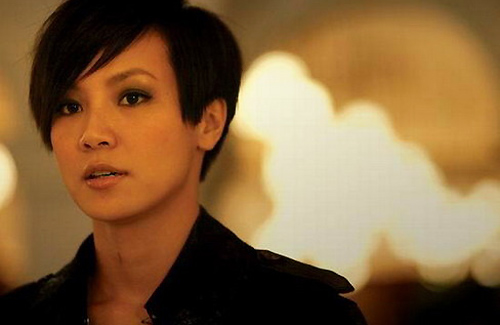 Denise Ho (何韻詩) went straight back to work in Hong Kong after attending Taiwan’s Golden Horse Awards the previous day. Despite her tight schedule, Denise was in good spirits at the autograph event for her latest album Recollections, a tribute album to her late mentor, Anita Mui (梅艷芳).

Earlier this month, Denise took a three-week vacation to Montreal, Canada to visit her family and childhood friends. She said, “I visited my old school and went to the place where I used to live. I really thought about giving a house to my parents for their retirement. A lot of memories came to me on this trip.”

Denise, who came out publicly as a lesbian last year, praised that Canada has very advanced rights for LGBT individuals. “You can get married and have kids. I also hear from friends that the government can also sponsor you if you want to get artificial insemination.”

Asked if Denise is interesting in getting married or have kids, she said, “I’ve considered everything. Most of my high school friends already have like three to four kids.” The 36-year-old then added with a laugh, “I do want to have kids. There aren’t many years left in me! Maybe then you’ll see a pregnant me working!”

A while back, Denise attended the wedding of her good friend and hair stylist, Arris Law. Joey Yung (容祖兒), who was formerly a close friend of Denise’s before their falling out in 2012, also attended the wedding, but when asked if Denise had met up with Joey, Denise denied, “I didn’t see her, really.” Mentioning that Joey was a bridesmaid at the wedding, Denise said, “Now that you told me, I know.”