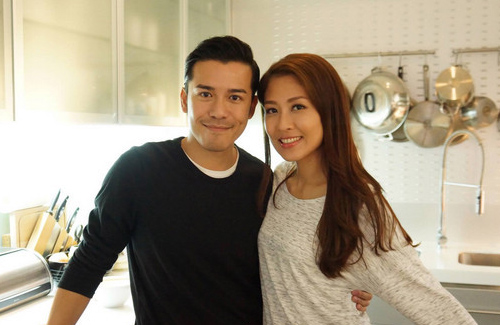 TVB actor Sammy Sum (沈震軒) made his debut as a singer under Paco Wong’s (黃柏高) Sun Entertainment Music last year with the release of his first digital single, “It Becomes Real” <講多變真>, which peaked at number one on Metro Radio’s 997 Music Chart. His third single “Losing Love” <失愛>, released in early 2014, managed to top TVB’s JSG charts and landed in the top three of the 997 chart.

After completing the filming of TVB drama Young Charioteers <衝線>, in which he stars as the lead, Sammy went back to the studio to record his latest single, “Change Him” <換個他>. Sammy invited his Line Walker <使徒行者> costar and good friend Sharon Chan (陳敏之) to star in the single’s music video.

The music video storyline can be regarded as a continuation of Sammy and Sharon’s tragic love story in Line Walker. Sammy deems himself as unworthy to be Sharon’s lover. He wants Sharon to find someone else who can love her perfectly in every way possible, but in reality, Sammy wants Sharon to return to his side. The onscreen pair will also share many intimate scenes with each other, continuing the chemistry they left off in Line Walker.