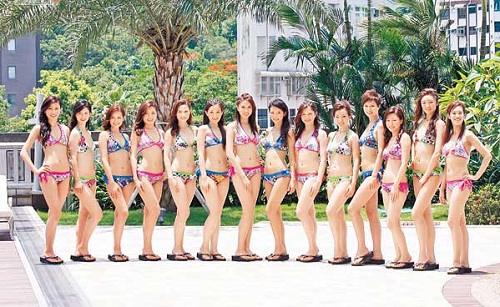 The fourteen contestants in the 2011 Miss Hong Kong Pageant appeared in swimsuits for the first time while fiming in Taipei, Taiwan, making the climate soar. Grabbing recent headlines due to old photos of her numerous ex-boyfriends surfacing, contestant #3 Whitney Hui (許亦妮) appeared to be the most voluptuous according to her official figure measurements on TVB.com.  However, at the swimsuit photo shoot yesterday, Whitney shockingly revealed thick thighs and a thick waist, allowing other contestants to outshine her!

Among the contestants at the swimsuit photo shoot in Taipei, contestant #13 Gemma Choi (蔡慧欣) from Great Britain, grabbed the limelight and shocked the crowd. Perhaps Gemma’s swimsuit was a bit small and did not cover the underside of her breasts properly. Onsite staff members had to adjust her bikini top for her. Since Gemma repeatedly blinked and rolled her eyes dramatically, she successfully attracted the press’ camera spotlight. Contestant #10 Lena Li (李天縱), also successfully boosted her “dumpling chest” and posed exaggeratedly in “Chok positions” before the cameras.  As a result, Whitney Hui’s limelight was stolen by the other contestants.

As one of the hot favorites in the 2011 Miss Hong Kong Pageant, contestant #7 Sandy Wu (胡中慧), stood out with her 33.5-inch long legs and sweet smile. Sandy easily threatened Whitney Hui. Despite possessing plain looks, contestant #15 Wyling Leung (梁蔚翎), had an uncommon pair of “missiles.” Her chest vibrated in a similar fashion to an earthquake of 7.5 magnitude! Jayne: There are some pretty contestants in the 2011 Miss Hong Kong pageant. I like #3 Whitney Hui and #13 Gemma Choi. Who are your favorites?