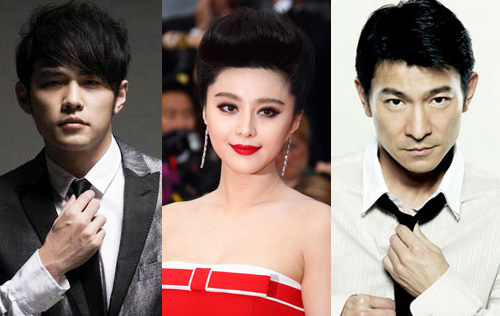 The 9th Annual Forbes China Celebrity 100 list–ranking the most influential entertainment and sports celebrities from mainland China, Hong Kong, and Taiwan–was released yesterday. Factoring in income and exposure rate, Forbes China’s annual ranking has become the de facto list in benchmarking the most influential celebrities in the region. For 2012, Jay Chou (周杰伦) was in the number one spot, followed by Andy Lau (刘德华) in second place, and Fan Bingbing (范冰冰 ) in third place!

Jay Chou was in the top three spots in the Forbes China Celebrity 100 list since 2009. Over the last year, the 32-year-old released a new music album, held a concert series, endorsed over a dozen brands, and appeared in The Viral Factor <逆戰>.  Jay earned $161.3 million Yuan last year, becoming the richest Chinese celebrity of the year!

In past years, Forbes China had only ranked celebrities in mainland China for the Celebrity 100 list. Last year was the first time that Hong Kong and Taiwanese celebrities were included. This resulted in Andy Lau sliding into the number one slot in 2011.  Andy’s income remained staggering last year due to his concert series. Andy’s investment in award-winning movie, A Simple Life < 桃姐 > resulted in box office sales of more than $100 million Yuan.

Fan Bingbing at the Forefront

Fan Bingbing’s exposure rate was incredible, often gracing fashion magazines in mainland China. Her excellent style sense and celebrated appearances at numerous red carpet awards have made her a darling among advertisers. Fan Bingbing endorsed more than 6 global brands and over 50 mainland China brands. She established her own production studio last year and was intent on pursuing a career in Hollywood.

Due to her sold-out concert series, Faye Wong (王菲) climbed to the 4th spot on the 2012 Forbes China Celebrity 100 list, earning $130 million Yuan last year. Jolin Tsai (蔡依林) was in 7th place, while Chiling Lin (林志玲) was in 10th place.

In 2011, Yang Mi (杨幂) was ranked in the 92nd spot on the Forbes China Celebrity 100 list. In the 2012 ranking, she climbed to the 13th place! Yang Mi’s popularity had indeed skyrocketed last year, gracing news headlines on a daily basis. Her recognition levels were increasing in Hong Kong as well, where she has become a favorite casting choice among local directors.

In the Forbes China Celebrity 100 list, 43 celebrities came from Hong Kong and Taiwan. Five celebrities from these regions entered the list for the first time. This year was the first year that Myolie Wu (胡杏儿) was placed on the list, due to the sizable boost in her income after filming more mainland dramas and product endorsements last year.

Climbing into the influential Forbes China list last year, Angelababy’s ranking was in the 100th spot this year.

Jayne: Jay Chou’s wealth is staggering! No wonder rumor has it that he does not care about making money in his karaoke chain; he was in business for the fun of it. Andy Lau has proved himself to be quite a businessman, earning so much money! Fan Bingbing’s wealth is also incredible! Mainland China is where all the money is made.

I wonder what spot Kevin Cheng is in? If Nicky Wu and Myolie Wu made the list, surely Kevin should be on it too?