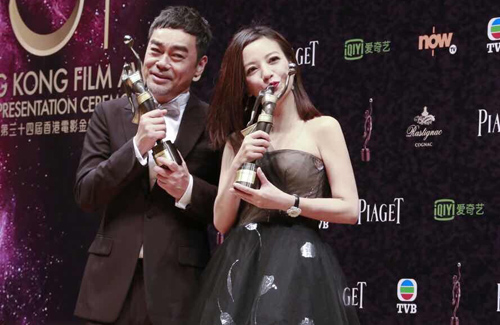 Sean won over critics with his performance in Overheard 3 <竊聽風雲3>. This marks his second Best Actor win since 2007’s My Name is Fame <我要成名>. After thanking his family and manager, Sean’s eyes welled with tears when credited his wife Amy Kwok (郭藹明) for making him stay grounded.

Facing fierce competition in the Best Actress race, Vicki Zhao triumphed over Charlene Choi (蔡卓妍), Sandra Ng (吳君如), Tang Wei (湯唯), and  Zhou Xun (周迅). Although her performance in Dearest <親愛的> was well received, Vicki was modest in her acceptance speech, “I never thought [the winner] would be me. Earlier, I prepared an acceptance speech for the Golden Horse Film Awards which I did not get a chance to share. Many thanks to director Peter Chan (陳可辛) for casting me in this role, although the character was not pleasant to look at. I want to thank all the actors in the film for their fine performances. Thanks to the Academy as well as my family.”

Other winners in major award categories: