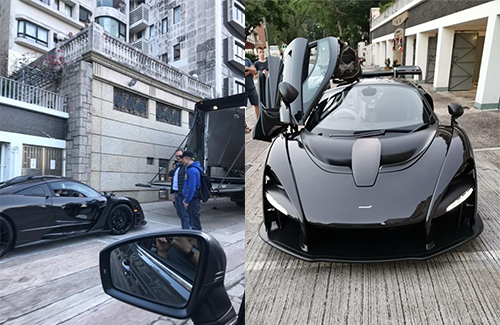 The freshly blonde Aaron Kwok (郭富城) rushed back home after attending a charity event, but it wasn’t to see his family—but his new car.

An avid car lover, Aaron has always had a habit of collecting exclusive luxury cars, each easily being worth over a million HKD. On December 1st, Aaron rushed back home after the charity event to welcome a new package—his new car.

The source said, “I drove past Aaron’s home and saw a huge truck by his driveway. They were unloading a black sports car. Aaron was taking pictures of it. The car was then parked on the sidewalk. Everyone would be able to see it. Very high-profile.”

The source managed to snap a picture of Aaron’s new car. The actor-singer was happily conversing with a friend and taking pictures of his new purchase.

7 comments to Aaron Kwok’s New Luxury Car is Worth 7.5 Million