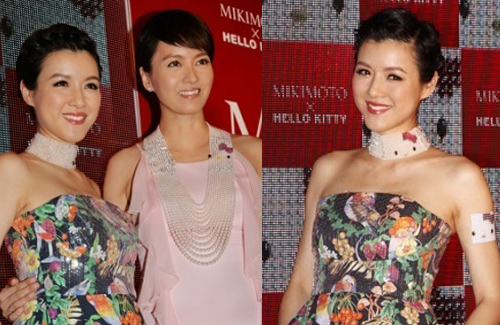 Expectant mothers, Aimee Chan (陳茵媺) and Gigi Leung (梁詠琪),  were bubbling with excitement over their three-month pregnancies. The women appeared at a jewelry promotional event today and congratulated each other over the exciting developments.

Last December, Aimee gave birth to son Aiden Joshua (陳梓燁). Aimee has been on a year-long acting hiatus from TVB since the early stages of her first pregnancy. Although Aimee was offered a role in Cheung Po Tsai <張保仔>, she turned down the offer due to family reasons. Now it is clear that Aimee’s second pregnancy is the reason why she has extended her maternity leave.

Glowing with happiness, Aimee shared her feelings about becoming pregnant again, “I’m three months pregnant. I’m very excited, as I’ve always wanted my children to be close in age. My younger brother and I are five years apart, and I’m always the big sister. If our ages were closer, we would get along more like friends.”

Aimee will be happy with having a baby boy or girl. “If there are two boys, they can share boy activities together. If the baby is a girl, then big brother can take care of her.”

Aimee still loves acting and hopes to be able to return to work after her second baby is born. Husband Moses Chan (陳豪) has been very supportive in Aimee’s decision. She said, “I hope that I can balance both family and my career. I hope I can have the baby sooner so I can work more.”

Since getting married in 2011 in Spain, Gigi Leung has been eager to start a family with her husband, Sergio. The 38-year-old actress was ecstatic when she found out she was pregnant, “My husband and I have been trying hard for a long time without success. I thought about giving up, but Sergio told me to relax and take a vacation. Three weeks after returning from our trip, I found out I was pregnant. I’m very thankful.”

Her first trimester gave her difficulty and Gigi was unable to eat meat without vomiting. Fortunately, she can eat rice and carbohydrates without any problems.

Gigi and Sergio eagerly look forward to becoming parents and have already started talking and singing songs to the growing fetus.