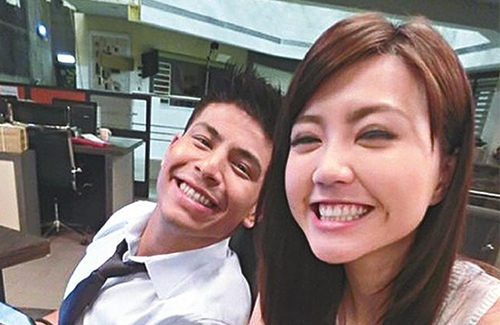 On July 18, TVB actor Alan Wan (溫家偉) will open up his own homemade ice cream and sandwich shop, called Stacks Ice Cream. The 28-year-old invested a seven-figure sum on the dessert shop, which will serve ice cream made with Alan’s own homemade recipes.

Alan has been working on the shop for many years. His close friend, singer-actress Jinny Ng (吳若希), also contributed a few ideas to the menu. Alan revealed, “Because of her, I’ve changed the menu many times! She said my ice cream has too much milk, and she prefers a blander taste. A lot of people do prefer ice cream with a lot of milk, but there are also people who can’t stand it. So I followed her suggestion and made the taste slightly blander. I really thank her!”

Rumored to be more than just friends, Alan was asked if he would use this opportunity to pursue Jinny romantically. Alan laughed and said, “I don’t know what’s going to happen in the future, but it’s definitely not now! This is my first time opening up a shop. I had no idea that there would be that many things to do. It’s very busy!”

Alan revealed that one of his homemade flavors, the “rose-flavored” ice cream, was actually Jinny’s idea. “I asked her what flavor she wanted, and she just told me vanilla and chocolate. I asked her to give me something more challenging, and she said rose-flavored. I know she likes blander ice creams, so I followed that and made one for her. She really liked it.”

Reporters suggested that Alan should get Jinny to invest on the shop so they can become “ice cream” partners. Alan laughed, “I can definitely consider asking her about investing, but no thank you as partners! Haha! I can maybe sign her to be my endorser. I’ll pay her a lifetime of free ice cream!”