Recently working alongside Joe Ma (馬德鐘), Ricco Ng (吳偉豪) and others on upcoming drama A Kind of Good Man <有種好男人>, actress Ali Lee (李佳芯) has been exposed by insiders for her habit of lateness on set!

Few Friends in the Industry

According to the source, the 39-year-old’s character had somehow altered after she got frozen by TVB following a political scandal in 2019; after which her replies during public interviews often seem to be loaded.

It is said that Ali had often arrived late on the set of A Kind of Good Man. Her lack of apology on reaching late further annoyed the production crew and gave the impression that she was rude and self-centered. Even though she remained professional, and would readily immerse into the plot every time the cameras started rolling, she still earned the ire of the cast and crew, who limited their interactions with her, and gave her a wide berth once the day’s work wrapped. The actress was known to be a lone ranger of sorts, and accorded her co-stars, the director and artiste manager the same cold treatment. Apparently, she also has just few friends in the industry, one of them being actress Samantha Ko (高海寧).

There was further talk that Ali’s habit of lateness started as early as in 2020’s Beauty And the Boss <愛美麗狂想曲>. A crew member revealed that even though Ali turned up no later than 15 to 30 minutes than the scheduled timing, her frequency of being late affected co-star Moses Chan (陳豪) the most since they two had the most scenes opposite each other. However, the good-natured actor chose to remain silent as he did not want to blow matters up.

When questioned about the rumor, Ali’s response was that she has not heard about such talk. Thanking the reporters, she added that she had cooperated well with everyone in the recently-concluded A Kind Good Man. When co-star Joe Ma was asked if she was often late to set, he skipped the issue by replying that filming had been thoroughly enjoyable. 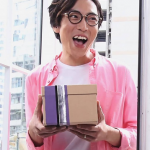 As for actor Billy Luk (陸永) who worked with Ali on the set of AI Romantic <智能愛人>, he said he had not encountered any incidence of the actress being late, and wondered how such a rumor started, smilingly asking the reporter, “Which colleague had pointed their finger at Ali?” Billy also spoke up for Ali and said that she had taken good care of juniors like himself, revealing that the two of them had interacted and discussed about their scenes together.