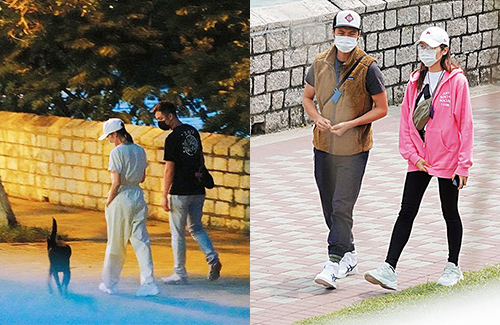 TVB dropped Ali Lee (李佳芯) in a freezer after the award-winning actress made a controversial statement on social media last year. Unable to get casted and getting dropped from drama sequels, Ali had to rely on other methods to change her luck.

Fortunately for Ali, she is far from being down in the dumps. Dating former ViuTV artiste Danny Chan (陳炳銓) for six years, Ali has a strong support group and is living a life of relative peace. Ali has been using her free time to invest in new hobbies and interests, while Danny has been focusing on backstage work. Although Viu TV had decided to not renew Danny’s contract, he stayed amicable with his former agency, and has been working on backstage work for the station. He is still filming dramas and has started an acting class for rookies.

The couple has also been using their free time to look for new homes. They have reportedly moved to a new independent house in Sai Kung’s Baisha Bay, as the open space allows them to better raise their dog, Dau Sze (aka “soy”). The move was also said to be partially due to its exceptional feng shui location: as soon as they moved, Ali’s new drama Death By Zero <殺手> was lifted off of its soft ban and got a premiere date. The drama is currently airing on TVB.

A feng shui master said that Ali’s new location in Sai Kung is lucky for artistes. The space is surrounded by greenery and mountains, making it a lucky spot for money. “It’s a reason why many celebrities like to live in Sai Kung,” he said.