Since divorcing Huang Xiaoming (黃曉明) in January, Angelababy (楊穎) has been diligently working on her career. Despite seemingly unaffected, the actress’ popularity and status have plunged dramatically based on her recent projects and treatment on the upcoming Season 10 of long-time reality TV show Keep Running <奔跑吧>.

As one of the original members of Keep Running, Angelababy has always been an anchor on the show and got along well with the cast. In the latest season, on set photos however show that Bai Lu (白鹿) and Song Yanfei (宋妍霏) apparently  excluded Angelababy in their conversations, as the latter walked behind them while looking quite lonely. Feeling awkward, Angelababy later choose to walk with the staff instead. 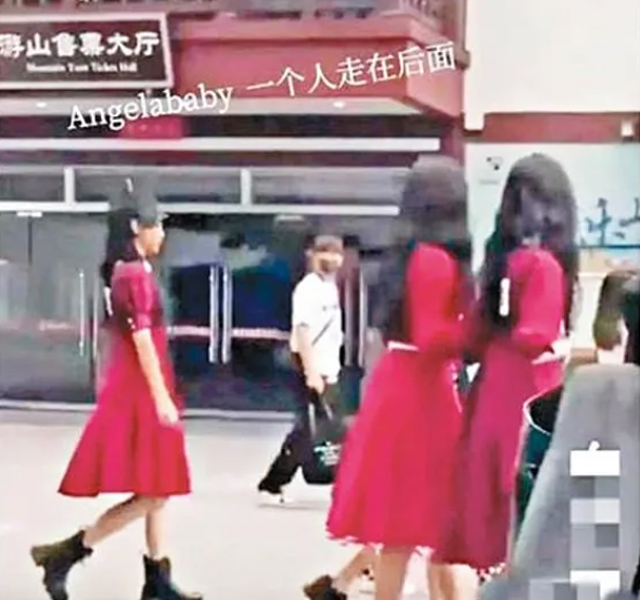 This is not the first time that netizens believe younger stars are starting to dismiss Angelababy.  Song Yuqi (宋雨琦) was criticized earlier for disrespecting Angelababy during a pillow mud fight game when the young idol had relentlessly whacked Angelababy in the face with a pillow.

While rumors of being at odds with the production team or younger stars were never addressed, fans find it disheartening to see Angelababy being treated like a nobody. A fan wrote, “Angelababy dedicated 10 years of her youth to Keep Running, but is treated so unjustly in return. Look at the difference between the costumes–the other cast wore nice garments while Angelababy was dressed in poor-quality clothes.”

Seeing her popularity apparently decline, netizens commented, “She really can’t leave Huang Xiaoming,” because her commercial value is visibly no longer the same. Aside from losing her jewelry endorsement deal of eight years, her five upcoming projects are generating only mediocre reactions since many of her younger co-stars Wang Anyu (王安宇) and Lai Guanlin (賴冠霖) do not seem to have much chemistry potential.