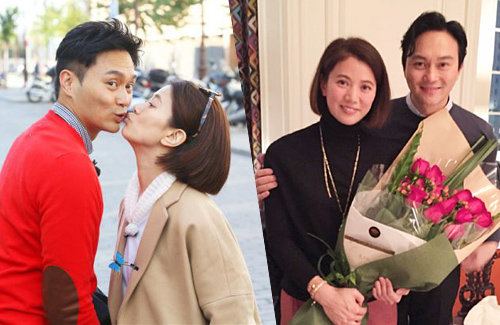 With the second season of reality show Viva La Romance < 妻子的浪漫旅行 > currently underway, Anita Yuen (袁詠儀) and Chilam Cheung‘s (張智霖) 18-year loving marriage is once again in the limelight. In the latest episode, Anita shares the story of how she fell in love with Chilam and how their first kiss occurred.

While filming the movie A Warrior’s Tragedy < 邊城浪子> in 1991, Anita admitted she was immediately attracted by Chilam and it was her that pursued Chilam. Laughing at how forward she was, Anita said, “Once you have your eyes on the target, then you have to strike! At that time, I didn’t think about whether he would like me or not; I just thought he wasn’t a bad guy after working with him for a while.”

Since the weather was very cold while filming in China, Anita asked Chilam out for a hotpot dinner on their first date. She said Chilam wasn’t hard to pursue, as they naturally got together after several dinners.

The couple made their relationship official on New Year’s Eve. Anita revealed, “It was the night before New Year and when the clock hit midnight, all the cars would normally honk their horns to signify the arrival of the New Year. When he was taking me back home, we kissed in the car, and in the end, it wasn’t only just a kiss!”

While Anita didn’t reveal what happened after they kissed in the car, everyone on the show definitely felt the love between the couple, and deduced that something sweet must have happened afterwards.