Together for 27 years, in which they were married for 18 years, Anita Yuen (袁詠儀) and Chilam Cheung (張智霖) are always open in discussing their relationship dynamics. Anita has always been open about her methods of keeping Chilam in check and asserting her presence. Not only did she admit to having “spies” around her husband, Anita has also made it a point to visit Chilam on set whenever there were romantic rumors between him and his female costars.

Friends Cautioned Anita to Be Careful with Chilam

Anita offered a glimpse of the possible reason for her domineering and overbearing actions. In a recent episode of Viva La Romance 2 <妻子的浪漫旅行>, the 47-year-old actress shared about a dinner experience she had with friends, which included Chow Yun Fat (周潤發) and his wife, Jasmine Tan (陳薈蓮). Jasmine expressed through a mutual friend to caution Anita, “Is this man reliable? He is so handsome. Tell her to be careful.” It turns out, Jasmine was not the only one who was distrustful of Chilam.

Anita shared that while the couple was dating, many of her friends disliked Chilam and were skeptical of him because he seemed to be quite flirtatious. Perhaps because of these cautionary words from friends, Anita became distrusting. She expressed, “At the time, Chilam asked me: ‘Do I not give you even the slightest sense of security?’ When he said that to me, I felt that I was in the wrong. But on the next day, I told him: ‘You should be the one to give me a sense of security. It’s not about whether I trust you or not.’” 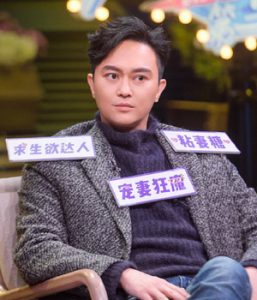 Known for his playful personality, Chilam may come across as flirtatious, leading to many rumors with his female co-stars. Although Anita knows these reports are untrue, she feels frustrated at having to answer media questions about them all the time. She reprimanded Chilam, “It’s not about whether you actually gave the other person a chance with you, it’s about giving someone the false pretense that there is a possibility of something happening.” Anita recalled a time when one of Chilam’s female co-stars who not only made soup for him, but would even buy him bedding sets.

“A Fortunate and Unfortunate Union”

When the camera panned to Chilam for his reaction, the baby-faced actor merely grinned and shook his head slightly. Rather than getting angry, upset, or embarrassed about Anita’s revelations, Chilam ambiguously expressed that meeting Anita was both a fortunate and unfortunate event. “The fortunate part is that I encountered her. The unfortunate part is knowing that our union will come to an end one day. Every person will grow old and die. It’s not up to you to decide who leaves first or who leaves later. We’re already very lucky. I don’t ask for anything else.”