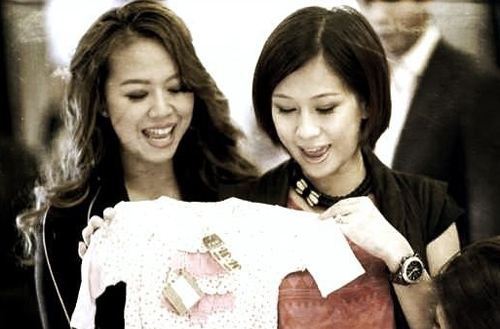 Already in the last trimester of her first pregnancy, actress Annie Man (文頌嫻) is prepared to face the challenges of motherhood! The 35-year-old is currently 7 months pregnant with a baby girl, whom she has already named Jamie. Annie exclaimed that while she has no knowledge when it comes to child rearing, she is ready to step into her next stage in life.

Annie Man began her acting career in ATV in 1993. Within seven years, Annie became the company’s top leading actress and was one of the company’s most popular artists. In 1999, Annie joined TVB and was cast in the star-studded anniversary drama, The Legendary Four Aces <金裝四大才子>. Her well-received performance won her a leading role in the equally successful Colourful Life <錦繡良緣>, the comedy that inspired the critically acclaimed period sitcom, Virtues of Harmony <皆大歡喜>.

However, Annie’s career in TVB eventually turned stagnant. In 2005, she finally decided to leave the company. For the next few years, she filmed several dramas in mainland China, but they were all met with lukewarm responses. Since meeting her husband, 35-year-old businessman, Jason Lee (李梓慎) in 2008, Annie lessened her filming commitments, but did occasionally make guest appearances in variety shows and public events.

While preparing for their wedding, Annie discovered that she was 3 months pregnant. Her family suggested her to postpone the wedding until after giving birth to the baby, but the couple decided to hold the wedding as planned.

Annie said, “During those days I was like Sleeping Beauty; I always wanted to sleep. It was really stressful. Luckily, I had many good friends such as Sherming Yiu (姚樂怡) and Angela Tong (湯盈盈) helping me out. My husband handled most of the trivial things, such as making invitations and booking venues. I would also help out once in a while.”

Because of Annie’s pregnancy, their honeymoon destination was changed from Maldives to Singapore. “It is unfortunate,” said Annie. “After arriving in Singapore, my feet got really swollen! I could not even wear my shoes!” Singapore’s hot and humid weather almost got Annie sick. She added, “Singapore is also famous for eating crabs, but I cannot eat them [due to pregnancy].” Annie admitted that her trip to Singapore was neither relaxing nor fun, but she and her husband promised to make up for a better honeymoon at a later time.

Annie said that their daughter’s due date will be in August, while projecting the baby delivery costs to be approximately $100,000 HKD. Like many pregnant Hong Kong women, Annie chose to deliver the baby via Cesarean section. Annie explained that not only is she afraid of pain, her husband is also a believer in feng shui. Their feng shui master will determine an auspicious delivery date and a Chinese name for the baby.

The feng shui master also pointed out that Annie has a very high chance of getting pregnant again! Annie said Jason would love to have more children, but a daughter and son would be enough for her.

According to Annie’s 3D ultrasound results, her baby’s legs were developing shorter than usual. Her doctor assured Annie that the baby is in healthy condition. When discussing about methods of parenting, Annie said that originally she planned to use the “good guy, bad guy” roles in disciplining her daughter, but added that it will depend on how her daughter’s personality turns out to be. She affirmed that she will make sure that her daughter will not have “princess syndrome” and will teach her the values of independence and respect.

14 comments to Annie Man’s Daughter Will Have Short Legs