Another Era <再創世紀>, TVB’s grand co-production with Mainland China’s iQIYI and CCTV-8, premiered in China on August 29 to lukewarm responses. On the other hand, Another Era was welcomed with grand applause when it premiered in Hong Kong on September 10. Why such dramatically different responses for the two regions?

There are several reasons that could have contributed to Another Era’s poor performance in China. First, the story’s financial backdrop may be more confusing and complicated for casual viewers to understand—the story spans an entire decade, starting with the subprime mortgage crisis in 2008. Brexit, acquisitions, hedge funds, and voting rights are among some of the financial and social topics that are heavily discussed in the show. Compared to China and Hong Kong’s last big hit Story of Yanxi Palace <延禧攻略>, a period drama about the inner politics of the palace, Another Era is considerably more difficult to follow. 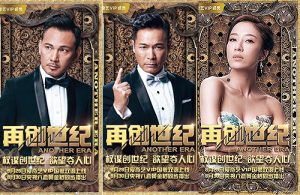 Secondly, the cast of Another Era has yet to successfully break into the mainland market. Lead stars like Roger Kwok (郭晉安), Frankie Lam (林文龍), and Tavia Yeung (楊怡) mainly focus on doing work in Hong Kong. On the other hand, Story of Yanxi Palace has Charmaine Sheh (佘詩曼), who already has popularity in China with her multiple dramas and variety show appearances.

Thirdly, the genre is just too different. Historically, period dramas such as Story of Yanxi Palace, Ruyi’s Royal Love in the Palace <如懿傳>, and Ashes of Love <香蜜沉沉燼如霜> would always have a stable fanbase and do well in China. Another Era is a brand new topic for viewers.