The following article contains spoilers for TVB’s Barrack O’Karma, which premiered on September 16, 2019.

The TVB supernatural horror series Barrack O’Karma <今宵大廈> has just completed its second week of broadcast, yet many questions are still unanswered. Fortunately, scriptwriter Ruby Law (羅佩清) is ready to serve the fans.

In a Q&A session with TOPick, Ruby clarified a few confusions that has been unsettling fans since the first episode. Even so, she still left behind some open ends, and encourage fans to keep watching to uncover the truth themselves. 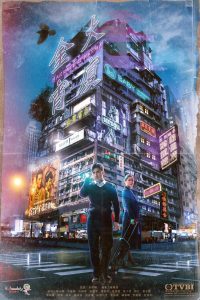 Both the story arcs of “Infant” <嬰> and “Crow” <鴉烏> ended on a sad note, but Ruby reassured fans that the villainous Mrs. Ho (Candice Chiu 趙希洛) and the tragic Tung Tung (Bryan Cheng 鄭耀軒) will make an appearance again, but it may not be in the form of a human.

In “Crow,” Big Gwong (John Chan 陳嘉輝) was the only person who did not had his memory wiped out by the crow spirit. Ruby explained that the moral of the story was that everyone has a choice to choose their endings. Big Gwong chose suffering over forgetting his son forever.

3. Mia (Tammy Ou-yang 歐陽巧瑩), Alex (Selena Lee 李施嬅), and Tung Tung stayed in the same apartment unit that was occupied by CoCo in the 1960’s.

4. The Twilight Mansion is its own character.

The Twilight Mansion (今宵大廈), the story’s main setting, is the true “star” of the show. The building can be seen as having its own character or own boundary, and is meant to be interpreted in many different ways. Currently, the Twilight Mansion is regarded as an apartment building that harnesses a special ability to change the destinies of those who step into it. The modern generation may see the apartment building as a time and portal, while those of the older generation may see it as a spirit.

5. Alex is not exactly human.

Alex appearance slightly changed after her flight from New York. Everywhere she goes, she leaves behind a puddle of water. Teacher Lam (Lau Kong 劉江) cannot see her, but Tung Tung and Ah Siu (Joel Chan 陳山聰) can. Ruby confirmed that Alex is not a physical human being, but declined to clarify what Alex actually, as that will spoil the ending. “She is an energy that can travel through time. That is why she is able to communicate with CoCo, who lived 50 years ago.”

The black cat, Leng Bao, is strongly connected to the apartment building and can travel across different times, which explains why he can be seen during multiple eras. Ruby revealed that Leng Bao is actually the show’s “big boss” who will impace the ending of the story.

7. Out of all of the characters on the show, only Tung Tung and Ah Siu can see Alex. Ah Siu’s previous life is connected with Alex’s. Tung Tung is a child, and therefore can see things that normal adults cannot see.