“I’m always living under the shadow of my brother,” said Billy in describing his character. “Ah Gor gets the job done. He’s smart and handsome. As for me, I failed my CPA license multiple times. My comfort zone is my home. I’m afraid of girls.” 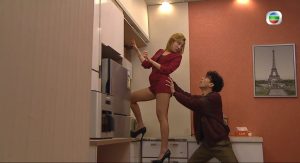 Nonetheless, Long Ka-hang does undergo huge character development throughout the show, and one very important story arc is his relationship with Sze Ka-lo, played by Kirby Lam (林秀怡). In a recent episode, Kirby goes to retrieve something in the top cabinet but slips. Billy comes up behind her to catch her, accidentally touching her butt. While Billy feels shy and embarrassed about it, Kirby scolds him for not holding onto her tighter.

“There’s a love hate relationship going on,” explained Billy. “There will be a big change to our characters, so our relationship on the show won’t play out in a typical way.”

Receiving love and support by fans for her character, Kirby said, “Who I need to thank the most is Billy Luk, because he’s the greatest partner you can ask for. When he’s in a scene, there’s going to be something to laugh about. He’s very easygoing, and a very quick thinker. I’m so happy that I get to work with him.”