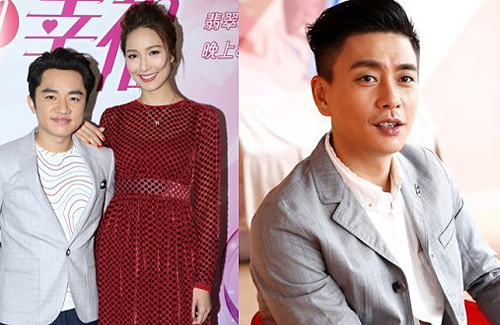 With his charisma and comedic flair, Wong Cho Lam (王祖藍) has achieved many milestones in his career, culminating in the opening of his own production studio last year. Utilizing his wit and humor, the 37-year-old artiste has found success in various avenues, including acting, directing, hosting, scriptwriting, and producing.

However, success comes at a price, and Cho Lam has been sacrificing time away from home and his wife, Leanne Li (李亞男), in order to pursue his career. With their two-year wedding anniversary coming up, Cho Lam promised to spend more time with his wife. To hold true to his word and not interfere with his workload at the same time, the couple recently hosted the TVB variety show, Love at First Sight <1+1的幸福>, together.

At the event,  Cho Lam was asked about his thoughts on Bosco Wong (黃宗澤) following his footsteps in starting a production company funded by Shaw Brothers. Cho Lam responded, “If it’s true, then that’s great. If there continues to be this type [of business partnership], artistes will have more choices and can be promoted. TVB is like a school, where you learn things. After graduating, you can look for other opportunities and different ways to collaborate with your company. Bosco is a businessman himself. Maybe doing so will give him more avenues for development in his entertainment career. It may be more convenient for his businesses too.”

On whether he has any tips to offer to Bosco, Cho Lam said, “Be fair, upstanding, and reasonable. He’s been involved in so many businesses; he’ll have no problem.” If Bosco does indeed start a production company, the duo may very well become competitors. Cho Lam heartily responded, “If I can be considered as his competition, then I’ll be quite happy! That means I can consider myself a leading actor [siu sang]. But of course not. He’s so handsome! In Mainland China, he is every girl’s idol!”

2 comments to Bosco Wong to Compete with Wong Cho Lam?