Rocking the entertainment industry, Leehom Wang’s (王力宏) cheating and divorce scandal has been the top trending topic for four days. The singer’s ex-wife Lee Jinglei (李靚蕾) accused Leehom of being a sex addict and having multiple affairs during their eight-year marriage. Without dropping any direct names, Jinglei alluded that Leehom had cheated with Singaporean singer BY2’s Yumi (孫雨), who had sent nude photos to the singer on his birthday.

In response to the negative rumors, Yumi initially said she would file a police report citing that “words can kill.” When Jinglei responded to the post and said she can assist with the investigation, many believe that she may have evidence of Yumi’s nude photo in her possession.

In an attempt to clear her reputation, Yumi posted a reply on her Weibo on December 19. She stated that she was not a third-party in their marriage, and claimed that she had stopped contacting Leehom since 2015.

Shortly afterwards, Jinglei retaliated with a photo of Yumi reaching out to Leehom on Whatsapp in 2015, implying that Yumi was lying.

In Yumi’s post, she admitted to dating Leehom prior to his marriage to Jinglei. Yumi wrote, “Mr. Wang and I dated in 2012 and even though it’s been years, the memories still remain. I was only 20 years old and cherished those feelings but at the same time, I was unwilling to admit fault.”

Yumi continued, “I was willing to sacrifice anything for love when I was 20 years old. I treasure our time together. There was happiness and there were fights – everything that a normal couple would have, from the sweetest moments to the heartbreaking ones.”

Admitting that they frequently shared mutual intimate photos with each other due to their long-distance dating relationship, Yumi reprimanded Jinglei for falsifying the timelines, and making the public believe that her relationship with Leehom was “indecent” and having an affair during his marriage. 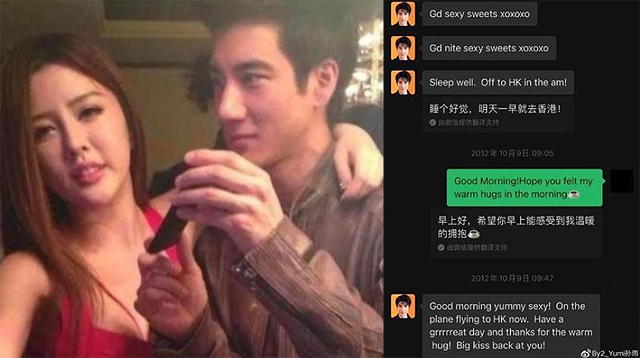 Replying to Yumi’s post once again, Jinglei revealed that Leehom only referred to Yumi as a “friend” whom he slept with. The original term Jinglei used in her post was “friends with benefits,” but was later edited to “friend.”

Jinglei said that she was dating Leehom for the majority of 2013, and already began meeting all of his friends and family members. “To me, this is what a ‘real relationship’ is like,” she wrote sarcastically.

Leehom Wang Accused of Cheating in Marriage Many Times