Announcing their separation, Leehom Wang (王力宏) and his wife of eight years, Lee Jinglei (李靚蕾) finished divorce proceedings in November.  Breaking her silence, Jinglei revealed a devastating account of why their marriage broke down. She accused the 45-year-old singer of soliciting sex services and “having different sex partners in every city.”

Getting married in New York in 2013, Leehom and Jinglei have three children: a 7-year-old daughter, 5-year-old daughter, and 3-year-old son. The image of their beautiful family was just an illusion, as Jinglei revealed her heartbreaking account on social media today.

Although she initially accepted “their unfair prenuptial agreement…in which the house was under his name and the car was under his mother’s name,” Jinglei felt that she was only a “pawn” for Leehom “to use” to improve his image as a family man while shielding his promiscuity.

She accused Leehom of cheating with multiple women, including a married woman during their marriage. Jinglei claimed Leehom had admitted his actions to her, but failed to admit any wrongdoing, and only said he “couldn’t control himself.”

Wanting to continue living a “single life,” he was an absentee father and would leave home for many months at a time. He would miss many important holidays and occasions with the family, including his children’s birthdays. 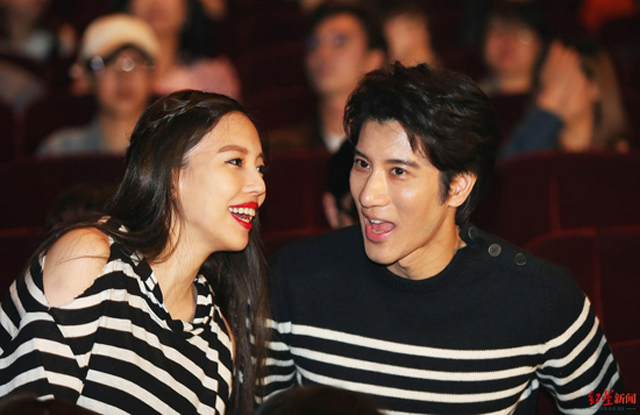 Falling for Leehom when she was only 16 years old, Jinglei felt that she was easily persuaded by Leehom’s flattery as he was already a big star. During their dating relationship, Jinglei realized that Leehom had many “friends with benefits” in different cities and was even photographed soliciting sex services.  When Jinglei asked to break up, Leehom “called her for several weeks, promising he would change and she would become his ‘only one.'”

However, Jinglei would later find Leehom betraying her many times during their marriage. She cited that he went drinking with his sex partner all night after his concert in Shanghai, and they took kissing photos. The woman even sent her nude photos to Leehom for his birthday.

Adding to her anguish, Leehom allegedly cheated with a married mother in their social circles. She also claimed Leehom had solicited sex services during their marriage.

Even though Jinglei was willing to tolerate his infidelity because of their children, Leehom insisted that they divorce and started bullying her when she initially refused.

Gave Up Her Career to Become a Mother

“Writing this letter is the most difficult decision I have ever made. Life is really not easy. I think that only when we face it bravely and frankly can everything be negated, and we can each have the opportunity to be reborn,” Jinglei wrote.

When she agreed to marry, Jinglei thought she would prioritize “her family for the rest of her life.”  Although she received an engineering degree from Princeton University and then a MBA from Columbia University, and had worked at as an Assistant Vice President at JP Morgan Chase’s Consulting Services, Jinglei “gave up her career and her own life” because Leehom had wanted children. She was willing to do this because she loved her children, but she was heartbroken by her husband’s constant betrayals.

Feeling that “powerful people have been manipulating the media, and the media manipulating the public” all along, Jinglei hopes that by revealing the truth, “public figures can be seen for who they truly are.” Even if Leehom’s career is impacted by her statement, Jinglei felt it was his own doing “through his own choice” of behavior and lack of ethical conduct.

The Wang family had always treated Jinglei coldly and with suspicion throughout the marriage. It is said Leehom’s mother has always been very protective and had a say in his issues, including his love life. It is rumored that Leehom’s two previous celebrity girlfriends did not meet his mother’s background requirements, and she strongly rejected them. She set very high expectations for her daughter-in-law’s educational background due to the Wang family’s prestigious credentials.

Although Leehom and Jinglei’s divorce may still be sending unnerving aftershocks, signs of their marital troubles had already surfaced in 2019, when they stopped mentioning each other on social media and Jinglei had posted, “The journey is the endpoint.”

Leehom: “Getting Married Was the Craziest Thing That’s Happened to Me”