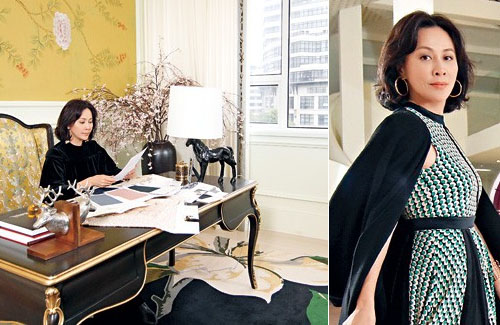 It comes to no surprise that Carina Lau (劉嘉玲) is a fan of hiking. Likening upland hiking to her own life, the 51-year-old actress said, “There are highs and lows. You climb past mountains after mountains. In many ways, it’s exactly like life. You’ll experience high waves and you’ll hit rock bottoms, but once you conquer it all, you’ll take a look back and feel satisfaction.”

For Carina, life is too short and limited to be wasted away; her only wish is to live a flourishing life with no regrets. When Carina not busy with a film, she would dedicate her time to her restaurant, bar, wine, and fashion businesses, learning as much as she can.

“Now that I’ve reached so far, I want to continue to pursue more knowledge,” said Carina. “I want to learn as much as I can. It doesn’t matter if it succeeds or fails. The most important thing is that I’ve tried. I have fulfilled my curiosity, and those are experiences that I can keep for my next challenges.”

Two years ago, Carina pumped out 20 million RMB to build her own fashion empire, ANIRAC. At the Shanghai Fashion Week a few weeks ago, Carina appeared as a fellow creator, not a celebrity guest.

“I never planned on starting a fashion business until that opportunity came up,” said Carina. “I wasn’t into pretty things when I was a child. I was actually quite a tomboy, and a lot of my friends were guys. We’d play with marbles, climb trees, steal fruits, and catch some crabs on the Yangcheng Lake.”

Carina, who grew up in Suzhou, China, did not move to Hong Kong until she was in her teens. It was then when she developed an interest into film and acting.

“It wasn’t until I started acting and got into watching Hollywood films when I started to feel inspired. A simple article of clothing could really leave you a strong impression of the whole movie. From that point on, I fell in love with fashion.”

Carina’s brand ANIRAC is her English name spelled backwards. The name was coined by Alice Tang (鄧霓儀), businessman David Tang’s (鄧永鏘) younger sister. “I wanted a fresh new name that could also represent me,” said Carina. “Alice suggested the backwards name, and since you can actually pronounce it, I decided to go with it. I like it a lot.” Three years ago, Carina rented an 8,000 sq. ft. office for ANIRAC in the Putuo District of Shanghai. The two-floor unit has a winding wooden staircase that leads to the main office in the second floor. The bottom floor is the lobby, where Carina would hold her business meetings. The office is also where Carina bases her film projects in.

Although ANIRAC only has about 20 employees under its wing, Carina spent millions to renovate the office with cozy chairs, comfortable decorations, and a minimalist lounge.

“It’s a lot of money,” she said, on the renovations of her office. “And I’m still throwing money at this business. There does come a time when you would want to stop, and ask yourself when all this spending would be over. But sacrifices are important in business, and plus this is also what I’m interested in. Not only is this fulfilling for me, it is also a comfortable work environment for my staff.”