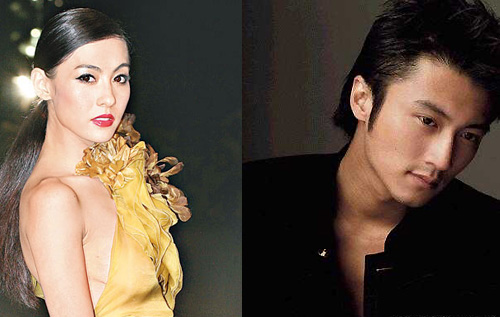 Since the onset of Cecilia Cheung (張栢芝) and Nicholas Tse’s (謝霆鋒) divorce crisis in May 2011, the ordeal lasted for a record 104 days, with the pair’s 4-year marriage finally ending recently! As revealed earlier by Oriental Daily, Cecilia and Nicholas reached a mutual agreement and released a joint public statement to the media announcing their divorce due to incompatible personality differences. On Friday, August 19th, after a 16-hour negotiation that lasted through dawn, Cecilia and Nicholas mutually agreed on the divorce terms, including the joint custody of their sons, the splitting of their financial assets and other issues.

After issuing their divorce statement, Cecilia and Nicholas resumed their work in Ningbo and Beijing respectively. Allegedly, Nicholas’ heart was peaceful on the set of mainland series The Next Miracle <下一個奇迹>. His family affairs did not impact his work. Filming The Lion Roars Again <河東獅吼Ⅱ>, Cecilia also immersed fully in her work. Yesterday, Cecilia had to film numerous action sequences and fortunately she was in good condition and finished her scenes quickly.

As for Cecilia and Nicholas’ divorce, how will their young children react and face the news? Obviously, it will be a difficult matter. Asked whether Lucas and Quintus knew about their parents’ divorce, Cecilia’s good friend, Rick Chin, noted, “I believe that Cecilia will have a way to explain to her children about the situation in the future. As to how she will tell the children, Cecilia has her own ideas and outsiders will not add their opinions. All the friends will love the children dearly! Lucas continues to be very happy. I don’t think he realizes that his parents have separated!”

Asked about Cecilia’s spirits, Rick Chin said, “She is feeling okay. Cecilia has always been very strong. For the sake of the children, she will continue to put in her best efforts at home and in her career!” Rick added that Cecilia and Nicholas loved their sons dearly. The pair thoroughly contemplated divorce matters before making their decision. Due to their filming schedule and need to take care of the children simultaneously, it is quite difficult. Fortunately, due to their financial abilities, Cecilia and Nicholas will be able to make the best possible arrangements!”

Below is the public statement released jointly by Cecilia Cheung and Nicholas Tse:

We, Cecilia Cheung and Nicholas Tse, officially announce our joint decision to obtain a divorce due to our personality clashes. As for matters relating to the divorce, we have arrived at a peaceful agreement.

We will be holding joint custody of our two children. Everything will be done with the happiness of the two children growing up happily as the main consideration.

In recent months, the media’s coverage about our divorce matters did not reflect the truth. We reserve the right to pursue legal action. We ask that everyone refrain from making additional unfounded speculations.

At this time, both of us would like to express heartfelt gratitude to everyone and our families. We hope that everyone will give us, our families and in particular, our two children some quiet living space, allowing them to grow up happily.

After this statement, we will no longer respond to questions regarding our divorce. Jayne: Cecilia Cheung and Nicholas Tse finally divorced. It feels very unreal…. The image of them as a loving couple and beautiful kids are just too picture-perfect. Although they decide they can no longer remained married, hopefully they remain on good terms to raise their sons together well. If their current film schedule continues, they have no time for Lucas and Quintus!

Your thoughts on how Cecilia and Nicholas’ marriage ended. Do you think it was never meant to be or was their divorce a result of a series of poorly timed events, one after the other, beginning with Cecila’s photo collaboration with Edison and Eileen Cha’s radio program airing the dirty laundry in Cecilia and Nic’s marriage?