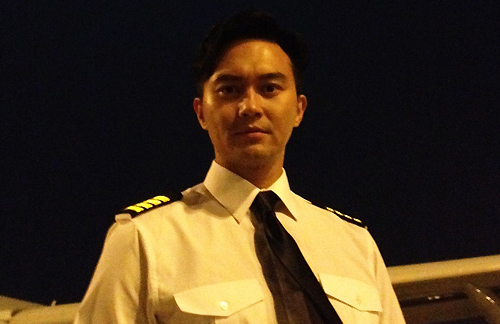 The wild poolside party photos of a bikini-clad Toby Leung (梁靖琪) embracing Ron Ng (吳卓羲) heated up tabloid headlines this week.  As the Triumph in the Skies 2 衝上雲霄II> cast was rocked by negative rumors,  Chilam Cheung (張智霖) attempted to alleviate the focus, by revealing that he will share a passionate scene with Fala Chen (陳法拉).

Appearing on a variety program with Annie Liu (劉心悠) on September 19, Chilam was asked to comment on Ron and Toby’s steamy poolside photos. “Were both of them filming a scene for the drama? I was not there, so I will not comment. But I’m even greater! In the drama, I will portray a playboy pilot. I will have ‘car shaking,’ bed, and even shower scenes! Later, I will film an intensely passionate scene with Fala Chen in the suburbs of France!”

Asked how his wife, Anita Yuen (袁詠儀), responded to his intimate scenes with costars in the pilot drama, Chilam indicated that he only found out about the scene himself.

Chilam’s costar, Annie Liu, in upcoming film, Natural Born Lovers <天生愛情狂>, revealed that she is currently not dating. Single for a very long time, Annie said, “I do not know what wrongs I have committed. I’m too closeted. I still feel that my romantic destiny has not arrived yet!”