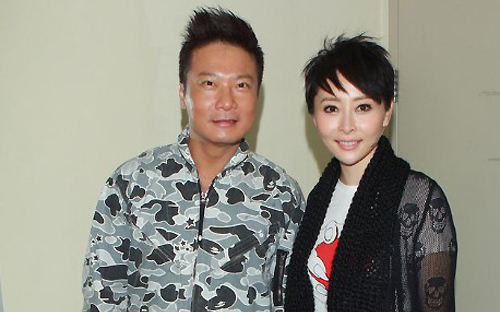 Chin Ka Lok revealed that their marriage has been planned for some time already, and they were just waiting for the right time to announce it. Ekin and Jerry tried to get the 47-year-old action star to reveal if his decision to marry Angela was due to her pregnancy. Ka Lok laughed, “I know I’ll get questions like these, but I didn’t expect them to come from my friends! I chose to announce my marriage today because my friends are present. Only Michael Tse (謝天華) isn’t here.”

When Ekin and Jerry continued to pursue questions of Angela’s pregnancy, Ka Lok finally hinted, “When the time is right, I will announce the good news!” Jerry laughed and said that he is willing to be the baby’s midwife if the pregnancy is true.

Ka Lok disclosed that their wedding will be held in Hong Kong, out of respect for their elders. He also acknowledged that Eric Tsang(曾志偉) has already received their wedding news. “I told Eric this morning, and he couldn’t stop laughing. I’ve never heard him laugh so happily before!”

Not long after Ka Lok’s announcement, the press caught up with Angela Tong in TVB Studios, who was busy filming for new comedy, Cousin, You are Good <老表，你好嘢>. Upon seeing the press, Angela hid her alleged baby bump with her long scarf.

Angela expressed that Ka Lok proposed to her when they were vacationing in Ko Samui, Thailand three months ago. “It was not an emotional proposal. He didn’t do anything special. He had no ring either, but he said many sweet things to me. We’ve been together for many years. Anyways; both of us think it’s time for marriage.”

The 37-year-old actress revealed that they originally planned the wedding to be held next year, but due to their parents’ insistence – and also because this year is the Year of the Dragon – they decided to push their marriage plans forward. When asked if it is because of her pregnancy, Angela smiled, “I cannot say it now. When it is time, I will announce it. But everyone knows that I love children!” She happily added, “I can finally be Mrs. Chin!”

Cousin, You are Good producer, Wong Wai Sing (黃偉聲), confirmed Angela’s pregnancy. Her costar, Roger Kwok (郭晉安) also expressed that he knows of Angela’s pregnancy, and laughed, “No wonder when I held her she seemed heavier than before!”